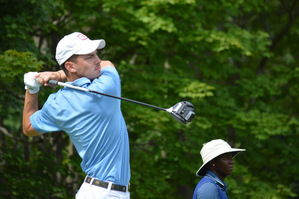 Trees don’t get a lot of respect in golf these days. Courses, clubs, members themselves even, brag about how many they’ve taken down.

But at Ridgewood Country Club in Danbury, celebrating its 100th Anniversary this year by hosting the 86th Connecticut Open presented by Reby Advisors, trees still get their due. Even after thinning and pruning done in the club’s latest renovation work, the red maples, birches and oaks that line Ridgewood’s fairways are integral to the test.

If architect Devereux Emmet were here to speak for them, he might say they were his eyes and hands, watching for golfers’ sloppiness, slapping back shots of misguided aggression. The trees add incredible beauty to the club, but help Emmet’s course, updated by Geoffrey Cornish and then Roger Rulewich, endure as test of shotmaking.

“The trees are definitely one of Ridgewood’s defenses,” says Max Theodorakis, a fellow member nearly won the Open in 2017, was Low Amateur in 2018, and after starring on the Campbell University team, recently turned pro. “They overhang some fairways, and you can be a few yards off the fairway and you may have to chip out or alter your shot. If you make a mistake it can lead to a big number.”

Ken Green, the 5-time PGA Tour winner who grew up caddying here, who won the Open at Ridgewood in 1992 and who is now a member says the it’s one reason why Ridgewood is a “placement" course.

“It’s a hard golf course,” says Green. “Obviously no course is long with today’s young players and technology, but you’ve got to play here. Ridgewood’s unique in that it gives you a lot of different shots. You have a lot of wedges that you have to place perfectly or you have the potential of a three-putt. And you have enough longer holes. It’s got some greens that will pretty much drive you nuts.”

Greens are small at Ridgewood, but slick and undulating, resulting in fewer birdies than one might expect on a course of 6700—6800 yards, especially when those greens are running at typical summer speeds. “When they’re fast, I mean you can have a 10-foot putt that you’re happy to two-putt,” says Theodorakis. Given recent heat, the greens may not be quite as fast as during some Augusts, but tricky nonetheless.

Ridgewood’s final defense is its three long par threes. Beginning at the eighth hole, they measure from 180 yards to more than 220, long “even for today’s players,” says Green. “Ten is the shortest, but it’s surrounded by water and the wind is always swirling there,” says Theodorakis. “Three and 17 are just beasts.” The course’s one-shooters are one of the reasons for Ridgewood’s healthy slope rating of 138.

“I love this golf course,” says Green. “It will be interesting to see what the good sticks can do to the golf course.”

Among the “good sticks” considered contenders, Green starts with Theodorakis. (They’ve played together often. Theodorakis says he tries to be a sponge around Green because “he knows so much.”)

“My guess is that Max is the player to beat,” says Green. Theodorakis is careful about that. “I think from strictly a golfing point of view, I have an advantage,” he says. “But as a member and someone who has played here a lot, the expectations are high. But in the end, yes, I think I have an advantage.”

On a short list of players to watch, add these names to Theodorakis’:
Paul Pastore, of Stamford, runner-up by a single shot to Rasmey Kong at Torrington, and winner of the PGA’s AT Major Tour Championship at Inwood Country Club last year.

Eric Dietrich, of Cheshire, who has competed on the Mackenzie Tour—PGA Tour Canada and played in the 2019 U.S. Open at Pebble Beach.

Pete Ballo, of Silvermine Golf Club, who has won often in PGA Professional tournaments in the trig-state area and in the PGA’s Winter Series, and who, with brother Mike and father Michael, Sr., is part of the Met Golf Writers Family of the Year.

Mike Ballo, Jr., who has come close several times at the Open, including in 2018 at New Haven Country Club, and who in 2019 won the New York State Open.

Cody Paladino, former professional who regained his amateur status this spring and plays now at the Country Club of Farmington. He finished 7th last year at the Open and was a finalist this year in the Connecticut Amateur at Shorehaven Golf Club.

Kyle Gallo, four-time Connecticut Open champion, who says his serious competitive days are over, but who neverthleless led the Open on day one in 2018.

Blake Morris, who, with brother Chandler, is one of four brother teams in the Open, and who shared fourth with Thresher and Babcock at Torrington.

Michael VanDerLaan, brother of 2018 Champion John VenDerLaan (now on the Korn Ferry Tour), who like John won the Division II Individual Championship before turning professional.
CJ Swift, runner-up to John VanDerLaan in 2018 at New Haven Country Club where he shot 14 under, only to lose by two.

Defending Champion Rasmey Kong will miss the open due to quarantine and travel complications of COVID-19. Others who have withdrawn for similar reasons include David Pastore and Ben James.

Spectators will be allowed to attend the Open at Ridgewood, but social distancing requirements will be strictly enforced. Play begins at 7:00 a.m. from the first tee on Monday and Tuesday, 7:30 on Wednesday.

The 86th Open, presented by Reby Advisors, has a purse of $60,000. First place is $14,000.
To the media: Press headquarters will be in the ballroom directly behind the main entrance.