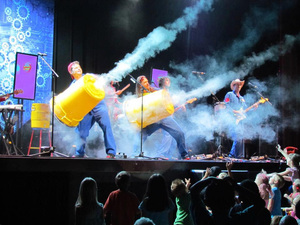 The Imagination Movers are luminaries of American alt-rock/ska kids’ music and the EMMY-winning stars of a hit TV series that can streamed on Disney+.

Over the last decade, they have entertained more than a million fans in North America, Europe, and Asia. According to thousands of fan reviews on Ticketmaster.com, Imagination Movers ranks as the No. 1 rated major touring act for families. With 98 percent of concertgoers recommending a Movers’ concert to friends and family.

Known as a high-energy, interactive live music act where families can encounter flying toilet paper, ginormous balloons, vortex smoke rings, confetti and more, the Movers are excited to return to the road and perform for fans, new and old.

With new music on the horizon and a recent number 1 song on a national kid’s music countdown, the Movers are looking forward to returning to the Edmond Town Hall in Newtown, CT.