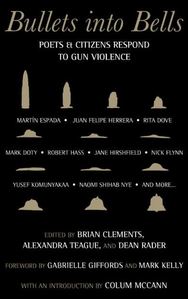 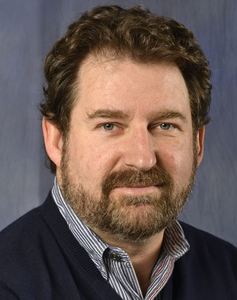 A poetry compilation edited by Western Connecticut State University Professor of Writing, Linguistics, and Creative Process Dr. Brian Clements was released today (Tuesday, Dec. 5) by Beacon Press. The book, “Bullets into Bells: Poets and Citizens Respond to Gun Violence,” is a collection of 54 poems that pairs poets with citizens and their responses to gun violence.

The compilation is introduced by Irish author and National Book Award winner Colum McCann with a foreword written by Gabrielle Giffords and Mark Kelly. McCann writes, “The poems attempt to create a community built not just of grief, but of hope, too … The poems assert the possibility of language rather than bullets to open up our veins.

“Many people in this book have suffered publicly, but the point of their poetry is not to whine or moan or even set things aflame but rather to communicate the intricate nuances of that suffering with others,” McCann continues. “It is a form of public sharing. Take these words. Weigh them up. Listen. Pause a while. Help reality touch justice.”

Nick Ripatrazone, writer for the online magazine The Millions, picked “Bullets into Bells” as one of the notable poetry books of December. “Poetry won’t make us whole again, but we need a form for our shouts and our cries,” Ripatrazone wrote.

“Bullets into Bells” was featured on the PBS News Hour on Monday, Dec. 4. A link to the segment can be found here.

Clements said, “The book is the first part of a three-pronged project, which includes additional poems and other content on the book’s website, and a nationwide series of events that will include readings from the book and discussion among local poets, activists and audiences. The first of those events will take place at the Boston Public Library on Dec. 13.”

Clements is the author of multiple books, most recently “A Book of Common Rituals,” and editor of “An Introduction to the Prose Poem”.

He lives in Newtown, Connecticut, where his wife, a teacher, survived the Sandy Hook Elementary School shooting.