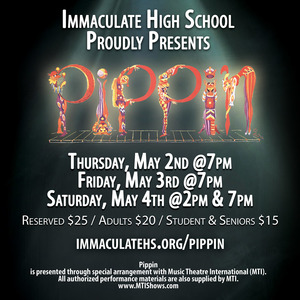 Immaculate High School will present “PIPPIN” on Thursday through Saturday, May 2, 3 & 4 at 7pm with a 2pm matinee on Saturday.  The musical features a cast of 48 students in the story of a young man on a quest for the meaning of life. Immaculate’s production of “PIPPIN” is an original concept version of the 1972 musical; it takes place in the mind of Pippin and will feature two Leading Players (instead of one), who serve as his consciences, one a good influencer, one bad. Newtown resident Arthur Michaelsen will star as Lewis.

Immaculate's musical this year promises to be like no other high school production as it will be performed in the round, meaning the stage will be in the middle of the gymnasium and the audience will surround it on all four sides. The Spring Musical is reimagined and directed by Matt Farina and produced by Kathleen Czel.

The lead performers of “PIPPIN” are: