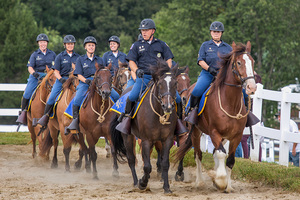 The show will be on display in the building’s main corridor until May 31. The photos may be viewed any time the building is open, generally Monday through Friday from 8 am until 4:30 pm, as well as during town meetings.

The exhibit depicts nine years of Ms Cafarelli’s documentation of the horse guard, showing all aspects of their events.

The 2nd Company Governors Horse Guard was established in 1808 originally to escort the governor of Connecticut, but now is part of the organized militia of the state under the direction of the Governor and National Guard. They are headquartered in Newtown, at 4 Wildlife Drive.

The dedicated troopers are volunteers who give 300 hours of their time annually, with life in the guard revolving around precision cavalry riding, care of their horses, and ceremonial public events.

Ms. Cafarelli is an honorary member of the horse guard. She and her husband Bill are the award-winning team behind Newtown based Photo and Video Art Works.

Two of her photos, “Riding Up to The Capital” depicting the members of the horse guard riding and walking across the back lawn of the Connecticut State Capital building; and “Tree Lighting,” of a Ram Pasture tree lighting event, are both on permanent display at Newtown Municipal Center.