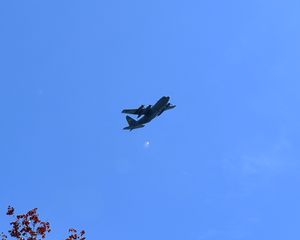 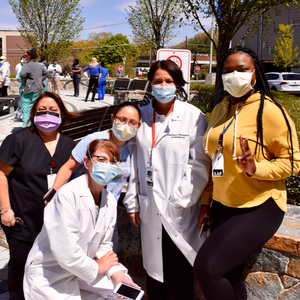 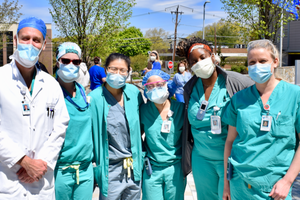 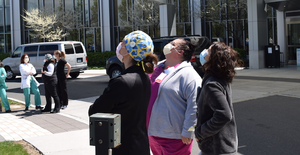 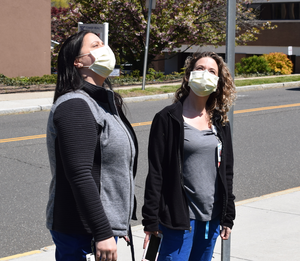 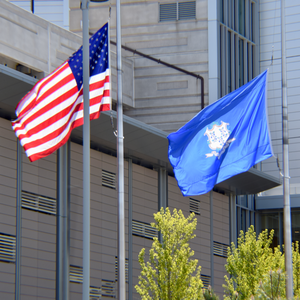 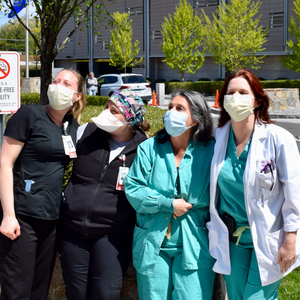 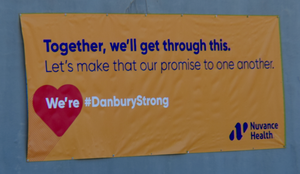 To salute Connecticut's health care workers for the service they are providing during the COVID-19 pandemic, the Connecticut Air National Guard conducted Operation American Resolve earlier today, Thursday, May 14. the Operation included a flyover of the Guard's C-130H aircraft over hospitals and other health care facilities throughout the state including Danbury Hospital.

"There are so many front line workers in Connecticut providing care, and this is the Connecticut Air Guard's way of saluting them and saying thank you. They are true heroes, and the amount of good they are providing for our state is immeasurable." Gov. Ned Lamont said in a press release

The Flyover took place at 11:28 am. but the excitement built before that. At 11:20 there were roughly 4  dozen spectators, including hospital staff, on the parking garage roof top and in the plaza at the main entrance.  Dozens more stood out in front of their homes or work places on the streets surrounding the hospital. Although some of the staff appeared a bit weary, their eyes lit up as the huge C-130H aircraft approached. A slight rumble from the engines was heard moments before the craft passed over head and although it appeared lumbering across the sky it was gone just as quickly making a sharp bank south to continue south towards its next destination, Greenwich Hospital.

As the staff and spectators applauded the Flyover, passing motorists honked their horns in salute as well and several of the hospital staff got teary-eyed at the salute.

The huge aircraft took off from Torrington at 11:08 am and continued west over Waterbury before flying over Danbury and heading south towards Greenwich. It then continued up the Coast, turned north at New Haven where it looped around the Hartford area and proceed southeast to fly by the New London/Groton area hospitals before heading back north east to Putnam and finally home to Enfield at 1PM.