Danbury Mayor Mark Boughton: Game ON John Oliver! You Can Have Your Namesake Sewer Plant IF ... 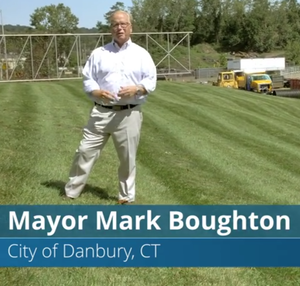 In a video created in response to HBO comedian John Oliver’s offer to donate $55,000 to local charities if the City of Danbury’s sewer plant was named after him, Mayor Mark Boughton’s much-anticipated response came today, just before the clock hit the one-week deadline.

Shown walking out of a porta-potty that is in front of the sewer plant, Boughton begins by pointing out some positive attributes of the City - it’s one of the safest in Connecticut, a great place to do business, and exudes diversity. “ It also is home to this beautiful, wonderful $110MM sewer plant,” said Boughton.

“John Oliver, we’ve thought about it, we are going to take you up on your offer, $55,000 if we name this plant after you. however, we do have one very specific condition,” he said.

And then, he gives it to Oliver in Boughton-style. Pointing at the camera he said, “You must come here (he points at the ground) and be physically present when we cut the ribbon.”

And what happens if he does Oliver-it-up?

Should Oliver choose not to take Boughton up on this offer, Boughton said he’s already talking to some other folks about the deal.

Oh, and BAM John Oliver, the City has already gifted you your own personal porta-potty - it’s called the “John Oliver [exlictive] House”. “So, Mr. Oliver,” said Boughton, “Come up to Danbury and sit on your throne!”

Oliver’s specified in his offer that the $55,000 would be donated to Connecticut Food Bank, DonorsChoose Danbury Teachers, and the ALS Association Connecticut Chapter IF he gets his namesake sewer plant.