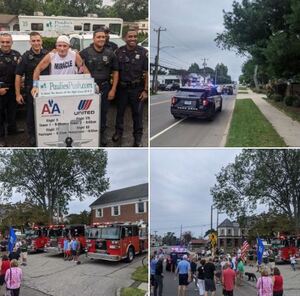 As a tribute to the flight attendants and crew members killed in the September 11th attacks, former flight attendant Paul “Paulie” Veneto is pushing an Airline Beverage Cart from Boston Logan Airport to Ground Zero, NYC.

Today, Sunday, September 5, Paulie crossed the line into Greenwich. He was met with American flags waving and cheers from supporters. He even stopped for some photo ops!

"Thank you to our first responders in Norwalk, Darien, Noroton, and Stamford for helping keep Paulie safe out on the road today!" Paulie's team posted on Facebook.

According to the team Paulie's Push, the former flight attendant's sole focus is to honor and remember the crew members who lost their lives on 9/11/2001.  With each step, Paulie's mission is to raise funds for the victims’ families and their foundations and collect donations for those struggling with addiction.

Visit pauliespush.com to check out his progress in real-time, and for the PaulieCamFollow Paulie's journey on Facebook here. You can also visit Paulies PUsh online and sign up to receive updates via text message.

Paulie’s Push is sponsored by Power Forward, Inc, a 501c3 Non-Profit Organization registered in the State of Massachusetts.