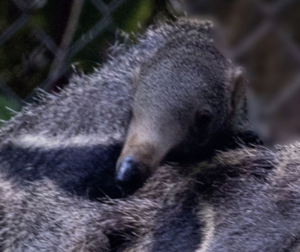 Connecticut’s Beardsley Zoo is pleased to announce the results of its “Name the Baby Giant Anteater” contest, giving voters a choice of three names: Chili, Andarilho, and Corajosa.

The winning name is Chili, referring to a small, spicy pepper often used in South American and Mexican cuisine.  The contest engaged hundreds of voters online.

Female anteaters give birth to one offspring and the baby rides on mom’s back for the first several months of life, occasionally venturing off not too far from mom to explore its surroundings. Pana and Chili will be outside only rarely for guests to view until spring, when the temperatures regularly rise above 50 degrees.

The Giant anteater's parents came to the Zoo from Palm Beach Zoo in Palm Beach, Florida. Both Pana and E.O. are twelve years old. They arrived in late May 2015 and are a highlight of the Pampas Plains habitat, which opened in August 2015. Featuring animals from the Pampas region of Argentina, Uruguay, and Brazil, the exhibit represents the Zoo’s South American Adventure.

Giant anteaters can live up to 26 years old in human care and are usually solitary animals. They can weigh up to 100 pounds and are five to seven feet long. Their home range is from southern Belize to northern Argentina, and they live in grasslands, humid forests, and woodland areas. Anteaters have one of the lowest body temperatures in the animal kingdom at 91 to 97 degrees Fahrenheit and can eat up to 30,000 ants per meal in the wild. The Latin name for anteater is Vermillingua, meaning "worm tongue," which can be as long as two feet.

Tickets must be purchased on the Zoo’s website at beardsleyzoo.org: we recommend that guests continue to wear masks while visiting the Zoo, but when guests are outside and are able to maintain social distance, masks may be removed. In any indoor area, or when social distancing cannot be maintained, masks must be worn. Everyone over the age of two, except for those with medical conditions that preclude wearing them, should have a mask available