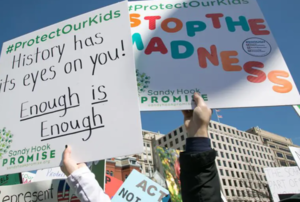 Mark Barden, co-founder and CEO of Sandy Hook Promise Action Fund, and father of Daniel, who was killed in the Sandy Hook Elementary School tragedy on December 14, 2012, issued the following statement in response:

“With the stroke of a pen, the high court has turned back the clock over a century, by eliminating proper cause requirements to carry a gun in public. Today, the justices are sending the wrong message to communities struggling to prevent gun violence. But we still can protect our children’s lives and also protect the Second Amendment.

“Undisputed research proves that prevention programs and sensible gun reform policies can — and do — work. Simple actions like background checks, magazine limits and extreme risk protection orders save lives. We encourage local, state and federal legislators to continue to pass such common-sense gun safety policies — which are allowed even under the Bruen decision. We will continue to work with all elected officials to advance bipartisan solutions.”

The Sandy Hook Promise Action Fund (SHPAF) is a 501(c)(4) nonprofit organization committed to protecting all children from gun violence in schools, homes, and communities. The SHP Action Fund advances a holistic policy platform that promotes gun safety, youth mental health, and violence prevention education. The organization works at the state and federal level to pass nonpartisan legislation through inclusive partnerships, diverse grassroots education, and community mobilization. It is part of Sandy Hook Promise, founded and led by several family members whose loved ones were killed in the tragic mass shooting at Sandy Hook Elementary School on December 14, 2012.