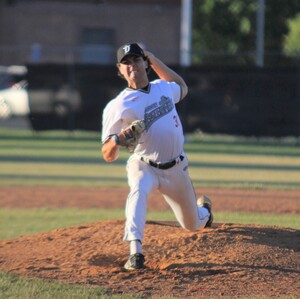 Nighthawks’ first baseman Clay Stearns launched a game-winning two-run blast in the sixth, and his team collected four insurance runs in the ninth to prevail over the Westerners 7-2.

Upper Valley (10-7) has won five in a row and six of their last seven, and they earned the season sweep against the Westerners with the win. Danbury (9-10) falls to 6-4 at Rogers Park this season, and they suffered their eighth loss when scoring three or fewer runs.

Stearns went 2-4 with those 2 RBIs and a run scored, and he was one of four Nighthawk hitters to record a multi-hit game. Nighthawks’ third baseman Ryan Ignoffo continued his hot stretch by going 3-4 with a home run, a walk, three RBIs, and three runs scored.

Westerners’ second baseman Jackson Taylor extended his hitting streak to four games by going 2-4 with a run scored, and first baseman Colby Canales went 2-3 with a double and a run scored. Korey Morton also recorded his third-multi hit game of the summer, and catcher Joey Skarad went 2-4 with an RBI single in the fourth.

After failing to capitalize with runners in scoring position in the first three innings, both offenses scratched a run across in the fourth to make it a 1-1 ballgame. Ryan Ignoffo began the frame by belting a solo shot over the left-field wall. The long ball was his league-leading seventh of the season and got the Nighthawks on the board, but the Westerners responded with an RBI single from Joey Skarad. Colby Canales smoked a two-out double over the center fielder’s head, and Skarad yanked an RBI single through the left side to plate him and even the score.

The Westerners’ baserunning prowess allowed them to plate a second run in the fifth. Jackson Taylor legged out an infield single to lead off the inning, and Korey Morton moved him over to third by smashing a long single off the right-center field wall. With runners on the corners and nobody out, Morton broke for second with the hopes of swiping his first bag of the summer. The catcher spiked the throw down to second off the pitcher’s mound, which allowed Taylor to break for home and slide in safely to give Danbury a one-run lead.

The Nighthawks snatched the lead right back in the top of the seventh. Ryan Ignoffo ignited the offense with a leadoff walk, and first baseman Clay Hearns demolished a two-run blast over the left-field fence to give his ballclub a 3-2 lead.

The score would remain 3-2 as the game headed into the ninth, but the Nighthawks gave themselves some breathing room by putting up a four-spot in the frame. Nighthawk’s catcher Nicholas Fazzari started the party with a one-out single, and he eventually scored on a seeing-eye single from center fielder Tyler Sorrentino to extend the lead to two. With runners on first and second and two down, Ryan Ignoffo delivered the big blow by cracking a two-run double into the left-center gap, and pinch hitter Kyle Novak drove him in by spraying a base hit into left field. Novak’s single gave the Nighthawks a five-run cushion, and Tyler Legere secured the win in the bottom half of the inning by retiring the Westerners in order.

Nighthawks’ relief pitcher Nick Moran (1-1) earned the win after tossing three innings of shutout ball. He only allowed one hit, walked one, and struck out three in his outing.

Although Westerners’ relief pitcher Curtis Clark (2-1) only conceded one hit in his two innings of work, he suffered the loss because that one hit was the two-run shot off the bat of Clay Stearns. His final line was 2.0 innings, two runs, one hit, one walk, and three strikeouts.

Westerners’ starter Zach Grace battled to keep his team in the ballgame. In four innings of work, Grace’s only blemish was surrendering a solo shot to Ignoffo in the top of the fourth. His final line was one run, four hits, two walks, and three strikeouts.

Nighthawks’ starter Chris Lotito hurled three shutout innings, walked none, and fanned three. He squeaked his way out of a bases-loaded jam in the second and finished strong by retiring the side in the third.

The Westerners will have a day off on Wednesday, but they return to action on Thursday night when they take on the Martha’s Vineyard Sharks at Rogers Park. Kyle Roche (2-0, 0.56 ERA) will take the mound for Danbury, and his first pitch will be thrown at 6:30 pm ET.