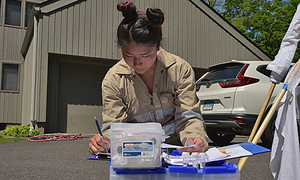 For over a decade, the Tickborne Disease Prevention Laboratory (Tick Lab) at Western Connecticut State University has focused on the prevention of Lyme and other infectious diseases transmitted by blacklegged ticks in the northeastern United States. Its goal is to help residents avoid illness by managing tick populations and reducing risk of exposure to ticks.

In June, researchers from the WCSU Tick Lab identified Asian longhorned ticks in the parking areas of Penfield Beach and Jennings Beach in Fairfield, Connecticut, and are advising town officials on mitigation strategies.

The innovational lab’s most recent research effort is a collaboration with the University of Rhode Island TickEncounter Resource Center and was funded by the Centers for Disease Control (CDC). The Deer Fence Tick Suppression Study is evaluating whether deer fencing on single residential properties suppresses host-seeking blacklegged (Ixodes scapularis) ticks. WCSU biology students are conducting the field work, research and review along with faculty.

“Many of our lab’s studies look at how tick-borne diseases can be prevented peridomestically, meaning keeping out of one’s own yard, by changing patterns of human behavior, interfering with the tick life cycle, or by managing the landscape,” said Dr. Neeta Connally of WCSU’s Department of Biological and Environmental Sciences. “Our study examines whether having a deer fence actually reduces the number of ticks found on residential properties,” she said. Connally, a medical entomologist, founded and oversees the WCSU Tickborne Disease Prevention Laboratory, also known as the Tick Lab.

The Deer Fence Tick Suppression Study evaluates the impact of deer fence on the abundance of blacklegged ticks by comparing half- to six-acre residential properties with deer fence (treatments) to similar properties without deer fence (controls) in southwestern Connecticut, Westchester County, New York, and southern Rhode Island. Critical to the field work is WCSU student participation. Since 2011, more than 40 undergraduate students have contributed to WCSU’s Tick Lab projects.

For this study, Sophia Chiaia ’24 of Bethel, a WCSU undergraduate honors biology major, and Lin Vitarbo ’23 of Newtown, also a biology major, actively worked in the fields and labs during the fall of 2021 and again this summer.

“This study is important due to the high risk of tickborne diseases; if we can find out that deer fences help lower the chances of tick populations it could help keep families safer from coming into contact with ticks,” said Vitarbo. She also hopes to find a pattern of data that would provide some insight into newer tick control and preventative measures for tick safety for the public.

Both Chiaia and Vitarbo traveled to different study sites to sample the quantity and types of ticks found on the inside edge of the fencing, interior forest areas and outside the fence. The goal was to see if deer fencing makes an impact on tick quantity versus unfenced yards.

Chiaia learned “how dangerous the yard can really be, as the risk for tick exposure is extremely high not only in the woods but in people's backyards.” She noted that this study is so important to human health and wellness since it will help residents stay informed with what they can do to keep themselves and their families safe. “Lyme disease cases continue to rise. It's important we all take the necessary precautions when going outside, even just outside of our homes. This includes doing tick checks, showering within two hours of being outside and wearing clothes that cover us well,” she said.

According to Connally, past studies found that the presence of residential fencing has been associated with reduced Lyme disease risk (Connally et al. 2009), possibly by preventing introduction of Ixodes scapularis ticks and reducing the density of host-seeking ticks. A 1993 study of large fenced regions of more than six acres within a private estate in Westchester County, New York, showed 83% fewer I. scapularis nymphs present within fenced areas compared to areas immediately outside of deer fencing, but the impact of deer fencing on the density of host-seeking Ixodes scapularis ticks specifically at residential properties less than six acres in size is unknown; this is what Connally’s study hopes to determine, and she expects to share the study’s results by the end of summer 2022.

“With this study, we hope we to understand the impact of deer fencing on the density of deer ticks in smaller residential properties - that way the CDC can inform residents what precautions to take when going outside and in their yards. This will hopefully decrease the exposure of deer ticks to humans, especially the smaller nymphs that can go undetected for longer periods of time and spread the agent of Lyme disease,” student researcher Chiaia added.

Both student researchers indicated that they feel fortunate to participate in the “incredible opportunities” that WCSU offers biology students and to be a part of something so important and meaningful to human health. “To me, biology is a great career path because every day I work toward advancing and helping people by aiding in scientific research for the future while also doing something I love,” said Vitarbo.

In the eastern United States, the blacklegged tick is the primary vector of several human pathogens, including those that cause Lyme disease, anaplasmosis, babesiosis, Borrelia miyamotoi disease and Powassan virus disease. Lyme disease alone is estimated by the CDC to account for nearly 500,000 cases of human illness every year in the United States, with the vast majority of cases occurring in the Northeast and Upper Midwest.

Studies in the WCSU Tickborne Disease Prevention Laboratory have been funded by multiple agencies, including the CDC and the U.S. Environmental Protection Agency (EPA). Tick Lab researchers collaborate on tickborne ecology and prevention projects with several other academic, scientific, public health and community partners, including the Town of Ridgefield Health Department, Nuvance Health, the CT Department of Public Health, the CT Emerging Infections Program at Yale, the CDC Division of Vector-Borne Disease, the TickEncounter Resource Center at the University of Rhode Island, and several regional land trusts and environmental advocacy groups.

To learn more about WCSU’s Tickborne Disease Prevention Laboratory and undergraduate Biology and M.S. in Integrative Biological Diversity programs, go to www.wcsu.edu/biology/ or contact WCSU Public Relations at This email address is being protected from spambots. You need JavaScript enabled to view it. .