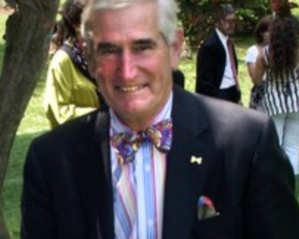 The Smith family announces with sadness the passing of R. Scudder Smith on August 14, 2022; he was 87 years old.

He attended his father’s alma mater, Amherst College, briefly, in 1953 but in 1954, he enlisted for three years with the United States Marine Corps, where he trained as a navigator at Cherry Point, N.C. There, he met and married Helen Willis, settling in upstate New York in 1957 where he attended Union College in Schenectady, N.Y.

Scudder’s family company has owned Bee Publishing Company Inc. and published The Newtown Bee for 141 of its 145 years. Scudder worked at the paper beginning in 1961; he succeeded his father Paul as editor in 1972. On June 28, 2022 — the 145th anniversary of the first issue of The Newtown Bee's publication — local luminaries, including Newtown’s First Selectman, Newtown's delegation to the Connecticut Legislature, both of Connecticut’s US Senators, and the Fifth District US Congresswoman honored The Newtown Bee for its longevity, and celebrated Scudder and his family’s love for and dedication to the community.

Scudder’s passion for antiques manifested in The Newtown Bee sister paper, Antiques and The Arts Weekly, which he founded in 1963 and began as four pages of antiques coverage in The Newtown Bee. It has covered antiques shows, auctions, museum exhibitions and related art-world events since then. In 2006, the Antiques Dealers Association of America (ADA) honored Scudder with its Award of Merit for his contribution to the industry that has been substantially shaped by Antiques and The Arts Weekly.

Scudder and Helen began buying antiques during their life in Schenectady, gradually gravitating to folk sculpture, with weathervanes, game boards, whirligigs and carousel figures forming the core of their collection. His collection carried from his home to the office, turning the newspaper's 5 Church Hill Road headquarters into an extended, ever-evolving showcase of his acquisitions. A passionate collector, Scudder built up a formidable still bank collection, adding to it even from his hospital bed in his final days.

Since 1981, Scudder enjoyed vacationing in Saint Barthelemy in the French West Indies, where he loved hosting family and friends.

When he wasn’t chasing antiques or the next story for the paper, Scudder enjoyed creating elaborate gardens designed with vintage structures and garden antiques.

Scudder is survived by Helen, his wife of 66 years; son, David Smith, and daughter and son-in-law, Sherri Smith Baggett and Scott Baggett; grandsons Benjamin and Gregory Smith and their spouses, and Scudder and Judd Baggett and their spouses; and six great-grandchildren, as well as friends and colleagues both local and around the world.

A more extensive obituary will be featured in the August 19, 2022 print edition of The Newtown Bee

To send flowers to the family of Scudder Smith, please visit our Heartfelt Sympathies Store.