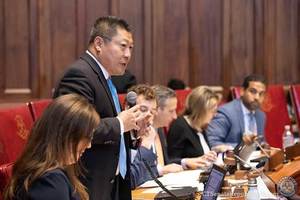 HARTFORD -- The CT State Senate passed legislation on a Democrat Party line vote to incrementally raise the state’s minimum wage to $15/hour by June 2023. Senator Hwang voted against the bill because of the significant negative effects this mandated new minimum wage will have on small and mid-sized businesses, municipalities, and nonprofits, and the negative potential for significant rise in unemployment and cost of goods and services. The legislation had recently passed the CT House of Representatives, also along party lines, after nearly 14 hours of debate. Democratic Governor Ned Lamont is expected to sign the measure into law this week.

“The desire and intention to raise people out of poverty by earning a livable wage is a noble and bipartisan goal. But government forcing employers to increase wages is not a responsible way to do so. It ignores market realities and is devastatingly counterproductive. Facing higher mandated costs,businesses will displace, through mechanization, innovation and cost efficiencies, and no longer hire many of the very population this bill is purported to help. Automation and technology are rapidly taking the place of minimum wage jobs even without this state mandate. This bill is a job and business killer.”

“Another major concern is the effect this will have on services provided by Connecticut’s non-profits. Our non-profits struggle every day to supply critical services to people who are disabled, to people with mental health issues, and to communities that need them.  They ensure the ‘social safety net’ will catch and support our neighbors. This bill would be a costly mandate to non-profits, and our services will suffer and their very survival is questionable as a result.”

“The cost of doing business in this state is already too high. If we impose this additional financial burden onto Connecticut businesses, they will have no choice but to cut workers and/or raise prices. It will not put more money in people’s pockets, it will increase unemployment, increase prices, and hinder growth in our already fragile economy.”

“A better solution would be to focus on providing educational opportunities to all employees whether through Employer Education Reimbursement credits or developing vocational/technical apprenticeship initiatives and focusing on building skills necessary for jobs in the 21st century marketplace. My fundamental principle is that government does not create jobs or wealth, it is the people who are risk takers and entrepreneurs who do. Raising the minimum wage will not create jobs and it will hurt the very people it is intended to help.”

State Senator Tony Hwang represents Connecticut’s 28th Senate district including the towns of Fairfield, Westport, Weston, Easton, Newtown & Sandy Hook.  Hwang is the minority leader on the Public Safety and Security, Higher Education and Employment and Housing Committees and was the former House ranking leader on the Labor and Public Employees Committee.