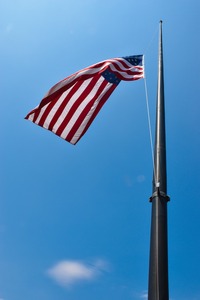 Governor Ned Lamont today announced that he is directing U.S. and state flags in Connecticut to be lowered to half-staff as a mark of respect for the memory and longstanding public service of Vice President Walter F. Mondale.

Pursuant to United States Code Title 4, Chapter 1, Section 7(m), the flag shall be flown at half-staff from the day of death until sunset on the day of interment following the death of a former vice president. Accordingly, since no flag should fly higher than the U.S. flag, all other flags, including state, municipal, corporate, or otherwise, should also be lowered during this same duration of time.

“On behalf of the State of Connecticut, my condolences are with the Mondale family,” Governor Lamont said. “Vice President Mondale devoted himself to championing the civil rights of all Americans and worked to ensure that everyone has opportunity to achieve success in their lives regardless of their socioeconomic background or upbringing. We are deeply grateful for his service to the United States and the legacy he leaves.”

The Office of the Governor will send out a notification when flags should be returned to full-staff.