Flags Lowered To Half-Staff in Remembrance of Robert Joseph Dole

Details
Published on Monday, 06 December 2021 13:11
Written by Office of the Governor 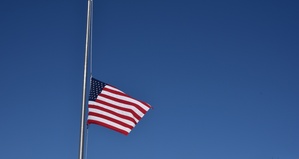 Governor Ned Lamont yesterday announced that – in accordance with a proclamation from President Joseph R. Biden, Jr. directing flags to be lowered throughout the country as a mark of solemn respect for Robert Joseph Dole – he is directing U.S. and state flags in Connecticut to fly at half-staff beginning immediately until sunset on Thursday, December 9, 2021.

“Bob Dole was a leader from a bygone era, one where country and public service came before all else,” Governor Lamont said. “He served his home state of Kansas and our great nation, both as a soldier in the U.S. Army and as an elected official, for nearly six decades of his impressive 98 years with us. His most notable years were as a leader of the U.S. Senate and the Republican nominee for the presidency in 1996. His character and love of our nation’s democratic values were unimpeachable. This country would be better off if it had more leaders like Bob Dole who put country over party at the helm. He will be missed by people on both sides of the aisle. Annie and I send our condolences to his family.”