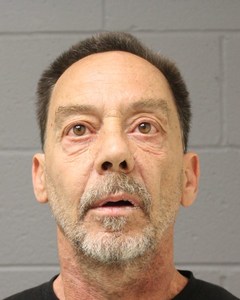 On Monday evening the Newtown Police Department received a 911 call from a concerned citizen reporting a black Ford pickup truck driving erratically in the area of the flagpole. Officer Mulhall, of the department's traffic unit, spotted the suspect vehicle on South Main St and stopped it.

The officer conducted an investigation into the driver's actions and after failed field sobriety tests placed the driver under arrest. A search of the driver and his vehicle produced evidence of further crimes. The driver was found to be in possession of marijuana, two rifles, and a sword.

The driver, John Petrocelli, age 56, of Meriden CT. was charged with:

Petrocelli was processed at the Newtown Police Department and held for court on a $10,000 dollar bond.

"Police have not been able to determine why Petrocelli was driving in Newtown, other then family members, though he might have been lost" Lt. Aaron Bahamonde " During the officer's investigation Petrocelli was not very cooperative"