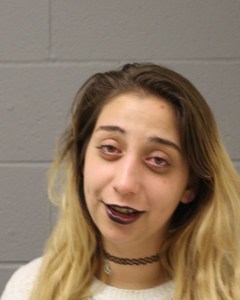 On Saturday evening, Newtown Police made a traffic stop on Wasserman Way for a routine motor vehicle violation.

The operator of the vehicle was found to have a suspended license.

The passenger in the vehicle attempted to lie to police about her name, but her identity was discovered as Elayna Smith, age 23, of Brookfield and it was found that Smith had a full no-contact order and was not to have any contact with the driver of the stopped vehicle.

Smith was subsequently arrested and charged with Interfering with an investigation and violation of a protective order.

Smith was given an additional protective order reminding her to keep away from the other party before being released on $500.00 bond.

As Smith exited the police department's lobby, a Newtown Police officer approached the vehicle that Smith had gotten into and observed the same individual whom Smith was not supposed to contact was a passenger in the vehicle.

Smith was immediately arrested again for another count of Violation of a Protective Order in the parking lot of the police station. She was released after posting an additional $1,000.00 bond and is scheduled to appear in Danbury Court on 09/30/2019 for both arrests.

"Protective orders are tools used by both the court system and police to protect victims of serious domestic violence arrests. To have two violations within hours is of serious concern and hopefully Ms.Smith got the message that police will not take these matters lightly and do whatever is necessary to protect the victim." Lt. Aaron Bahamonde