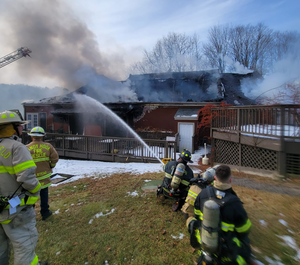 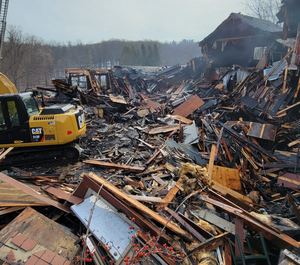 Today at 9:28 am, Newtown Hook & Ladder firefighters were dispatched along with the other four Newtown fire departments and ambulance for a working fire on Mount Pleasant Road in Hawleyville. According to reports, flames engulfed a vacant building most recently home to McGuire’s Ale House.

Newtown Hook & Ladder posted on social media that "Heavy fire was encountered on arrival and Ladder 114's crew stretched a two attack line from Sandy Hook's engine 441 and made a push into the building. Crews continued their attempts until the roof collapsed in the bar area. Due to a large amount of fire and damage to the structure operations switched to exterior operations and 114's elevated master stream was utilized."