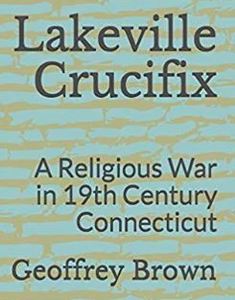 WHO: Geoffrey Brown, author and historian

WHAT: The Lakeville Crucifix, a tale of prejudice and nativism

WHY: To relate the historical conflicts that occured in one small Connecticut town

In the summer 1882 the rector of the recently built St Mary’s Church erected a life size crucifix on the front lawn of the church. By 1883 events in Lakeville, Connecticut became  so controversial that they made the front page of the “New York Times” and the “Hartford Courant”, and appeared in papers across the United States.

The “Times” page one headline read “Lakeville Crucifix” and local historian Geoffrey Brown used it as the title of his  new book about what has been called a “religious war”. Brown unearths the history behind this long forgotten occurence and outlines the series of events that comprised the Lakeville Crucifix incident. According to Brown “the most interesting aspects of the incident, were not the events themselves, but instead the collision of trends and movements taking place in Northwest CT and elsewhere in the United States during and prior to the incident.”  Brown recovers and re-publishes local history from New England, the Northeast, and first began doing so in the 1980’s while at CitiBank.

Among the major trends occurring at this time were nativism, major changes in the larger Roman Catholic Church, Irish immigration, the New England Puritan tradition, and the changing social and political structure of post-Reconstruction New England – as well as a few local players whose names are still known today.   All these factors contributed to Lakeville’s moment on the front pages of America. This was a recipe for the kinds of sociocultural, religious and geopolitical prejudices which echo in some quarters presently. Brown closely examined the contemporaneous sources to understand what went wrong and why. While this was a relatively major series of incidents for this small corner of the United States, it could have been far worse, as such issues were elsewhere during this time period. Brown’s talk is cosponsored by the Salisbury Association Historical Society and will be featured at  the Scoville Memorial Library on Saturday February 16, at 4pm.

Contact: Lawrence Davis-Hollander, Adult Program Coordinator at  This email address is being protected from spambots. You need JavaScript enabled to view it.

Claudia Cayne, Library Director at  This email address is being protected from spambots. You need JavaScript enabled to view it.