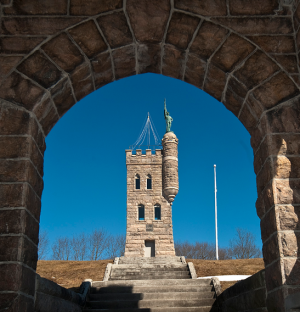 When traveling through Winsted, the view of the Soldiers' Monument atop the hill on Crown Street is a striking reminder of our country's Civil War.

Funds to construct the monument were raised by the people of Winsted in the 1800's.  According to the inscription at Soldiers' Monument Park, it was  "Erected by the citizens of Winchester in recognition of their obligation to the loyal men who represented them during the war of the rebellion whose names are herein perpetuated in grateful remembrance of their patriotic service … 1861-1865."

A week-long celebration is planned to commemorate the anniversary of this Winsted landmark.

On Thursday, September 10 the festivities begin at 6:30 p.m. when  Howard Wright takes the stage as Abraham Lincoln in 'With Charity For All: Lincoln's Last Year', at Northwestern Connecticut Community College's Founders' Hall.  This presentation is made possible through the support of Northwest Community Bank and the NCCC Cultural Planning Committee.

On Friday, September 11, join Virginia Schultz-Charette for a walking tour of Civil War graves in Forest View Cemetery on Rowley Street at 5:30 p.m.

Following the tour, at 7 p.m., come to Colebrook Book Barn at Whiting Mills, 100 Whiting Street, for a book signing with John Banks, author of Connecticut Yankees at Antietam and Hidden History of Connecticut Union Soldiers.

Continue your Saturday with Coming Home: The Soldiers' Monument Commemoration Ceremony at the monument at 12:30 pm. Guest speakers include historian Bill Hosley and Ernie Price, National Parks Service Guide at the Appomattox Battlefield.

The Winchester Historical Society will open at 2:30 pm on Saturday, September 12. Come and view the history of Winsted in person.

The celebrations culminate Saturday with a Civil War Ball at the Winsted Elks Lodge, 75 High Street. Come to the lodge early to learn Civil War era dances from 2:30 to 4:30 p.m.  The ball commences at 8 p.m., but the doors are open at 7.  Tickets are $25 in advance and $30 at the door.  Contact Deb Kessler for tickets at This email address is being protected from spambots. You need JavaScript enabled to view it. or call 201-388-5912.

The Soldiers' Monument and Memorial Park is located on Crown Street in Winsted.