Volunteers Sought for Reading of Names at VietNam Memorial 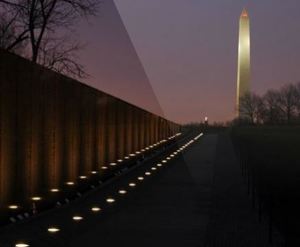 When the Vietnam Veterans Memorial was dedicated in Washington, D.C. in 1982, a promise was made to never forget those who served and sacrificed their lives in the Vietnam War. Etched in its black granite walls are the names of 58,318 service members who were killed or remain missing. The Wall honors their courage, sacrifice and devotion to duty and country. Since its inception, The Wall has become a sacred place for loved ones and visitors to pay their respects. By separating the war from the warrior, The Wall began a process of national healing.

This year marks the 35th Anniversary of The Wall. In commemoration of the Anniversary, the Vietnam Veterans Memorial Fund (VVMF) is honored to host the 2017 Reading of the Names of the more than 58,000 service members inscribed on The Wall in Washington, D.C. The Reading of the Names will take place at The Wall for 65 hours over a four-day period beginning with an opening ceremony on Tuesday, Nov. 7 at 3:00 p.m. Volunteers will read names for approximately eight hours from 4 p.m. on November 7 to 12 a.m. on Nov. 8. Participants will then read the names for 19 hours daily from 5 a.m. until 12 a.m. on November 8, 9, and 10. Volunteer readers can sign up for a specific name on The Wall or for a timeslot in which they are available to read.

VVMF is asking the public to join them in this monumental event, as a reader or as a spectator, in honor of their sacrifice. Registration is now open for reading times at http://www.vvmf.org/ROTN.

One of the best ways to honor our fallen is to say their names and share their story. Behind every name on The Wall is a person, a life cut short, and a family changed forever. By saying their names, we are saying we will never forget them.

Remember Pfc. Dan Bullock, the 15-year-old Marine who forged his birth certificate to join the U.S. military and became the youngest American service member to die in the war. Remember Navy chaplain Lt. Vincent Capodanno, who was administering comfort and last rites to Marines when he went to aid a wounded corpsman and was killed by enemy fire. Say the name of Army nurse 1st Lt. Sharon Lane, one of eight women to die in Vietnam, and the only one to die from hostile fire. These brave men and women left behind friends, brothers, sisters and parents. They had the same hopes and dreams as the rest of us. It is only fitting that we come together at the place our nation has set aside to remember them.

To register to be a part of the Reading of the Names in 2017, click here.