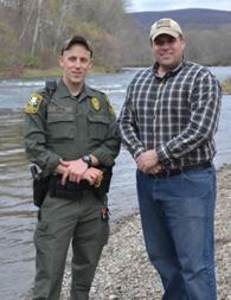 Officer Norton began his patrol through the Housatonic Meadows and continued to the Kent Falls State Park. With fishing season opening only a couple of weeks ago, many residents were taking advantage of some Saturday afternoon casting. Officer Norton checked several licenses and spoke with the fisherman about their early season success, or lack thereof.

Rep. Ohler explained, “I was privileged to be able to ride-a-long with the CT State Environmental Conservation Police. ENCON Officer Ed Norton provided us with a detailed tour of our state parks and numerous waterways. Officer Norton's immense knowledge and professionalism allowed for us to have fruitful conversations. The tasks and duties that are expected of all ENCON officers are vast. Their ranks and other resources may be limited, but these men and women are some of the most adaptable, dependable, and driven individuals that you will meet. They are truly passionate about their mission and dedicated without waver.”

Prior to the ride-a-long, Rep. Ohler also participated in clean-up efforts in Sharon and Falls Village. Rep. Ohler, along with many local volunteers, took to the roadways, parks, and streams to collect litter.

“It’s upsetting to see how much trash is just thrown to the side of the road or on a bank of a stream. We have a beautiful landscape in the Northwest Corner and we all have a duty to keep it that way,” concluded Rep. Ohler.

It should also be noted that Rep. Ohler issued a 48-Hour Earth Day challenge, encouraging his colleagues, friends and family to clean up one bag of litter or to donate to a local environmental group. So far, the challenge has yielded great participation including DEEP Commissioner Robert Klee.