Details
Published on Tuesday, 09 May 2017 00:36
Written by Office Of State Senator Kevin Witkos 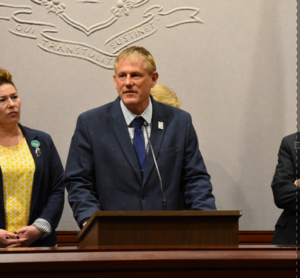 “Swatting” is falsely reporting an emergency in an attempt to get law enforcement to dispatch of a large number of armed police officers to a particular location.

“By making swatting a felony we can deter people from engaging in these dangerous and costly pranks. It’s sad that we even need a law to clarify that this behavior creating unwarranted distress is completely unacceptable. I thank all lawmakers who came together in a bipartisan effort to stand firm on this important public safety issue.”

Sen. Witkos decided to propose this bill after a swatting incident occurred in July in Torrington at Burr Pond when a person called 9-1-1 to report a potential child drowning. After dispatching over 40 police officers and firefighters and multiple hours of searching, it was discovered that the call was a hoax.

The bill now moves to the House of Representatives. A vote must be held before the end of the legislative session on June 7 before the bill can become law.