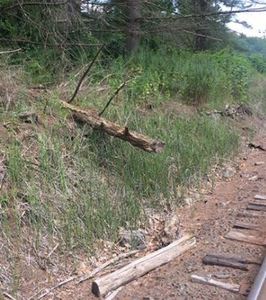 State Representative Brian M. Ohler (R-64) was elated to learn that his bill, HB 5873 AN ACT REQUIRING NOTICE PRIOR TO PESTICIDE/HERBICIDE APPLICATIONS BY RAILROAD COMPANIES AND REQUIRING VEGETATION MANAGEMENT PLANS BY SUCH COMPANIES was officially added and passed as part of a comprehensive package set forth by the Department of Transportation.

“It was an honor to draft this proposal with a dedicated group of Northwest Corner residents. I testified in support of this initiative with Cornwall’s First Selectman, Gordon Ridgway, back in February. Many concerned residents who live along Route 7 and the Berkshire Hills Route Railroad Corridor have raised the warning flags after witnessing the destruction and decimation of countless white pine trees and other precious plant species in the towns of Kent, Cornwall, and Falls Village,” explained Rep. Ohler.

First Selectman Gordon Ridgway said, "I am very glad to see this bill passed. It is very important that the Housatonic Valley remains green, not brown. The need for more sensible vegetation management by the railroad company should be obvious to anyone walking on River Road in West Cornwall."

According to Ohler, “The herbicide application that takes place along railroad corridors is a fog spray approach. This indiscriminately puts herbicides, which are designed to kill vegetation, all over the greenspace along the railways. This practice has placed an increased public health risk upon our neighbors and has contributed to the destruction of our overall natural beauty. This mandated transparency will now give our small towns the chance to review these annual plans before the application takes place and address any concerns that are associated with said plan.”

“As a lifelong resident of Connecticut, more specifically the amazing northwest corner, I have always been keenly aware and conscientious of our environment and the overall beauty of our vast landscape. It is important to preserve our greenspace as it is one of the state’s greatest resources, which is why the herbicide sprays must be more controlled,” concluded Rep. Ohler.

The legislation also requires public notice after the Vegetation Management Plans have been submitted, so residents can be educated and included in the process. This bill was one of the very first proposals to be raised by Rep. Ohler. Over the course of six months, this bill was guided through public hearings, two committee deliberations, and state-level agency negotiations.