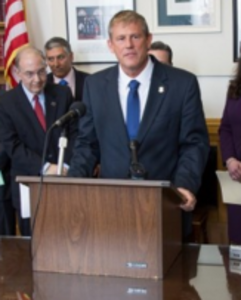 When it comes to the state budget, I think every resident of the state can agree on one thing: we need action.

But we need action on a budget that truly helps our state overcome its challenges.  We need a budget that protects education funding, that brings stability to our towns and cities, and that restores funding for core social services. At the same time, we need a budget that gets state spending under control and does not increase taxes.

All of these principles were achieved in the budgets Republicans have proposed throughout the year and tried to get the legislature to vote on – efforts that were repeatedly rejected by Democrat legislative leaders who determine what bills and budgets are voted on. Nevertheless Republican lawmakers have never stopped trying. Today, we are still pushing for a budget that moves Connecticut forward and will avoid the devastating education cuts the governor’s executive order would inflict on our schools come October.

Over the past year, Republicans have offered multiple budgets, revising them whenever the state’s finances worsened or Democrats offered feedback. Even after the labor deal negotiated by the governor was passed by Democrats, locking in wage increases and eliminating potential labor savings proposed by Republicans, we never gave up. We immediately began revising our budget yet again to identify even more new savings to replace those we could no longer achieve once the damaging labor deal became law. And for weeks we’ve continued to have conversations with Democrats in the hopes that we will come together on a budget that moves Connecticut in a new direction.

But instead of a willingness to change, we have seen Democrats go back to the policies that created this mess to begin with. They’ve proposed tax increase on top of tax increase and promised dates for votes that have come and gone.

Enough is enough. We need to vote on a budget that moves Connecticut forward, not backwards. The two largest tax increases in state history did not resolve the state’s financial crisis; they led us to the chaos we face today. More of the same won’t change our state for the better.

That’s why the Republican budget proposals have sought change. We’ve proposed ideas to reduce the size of government, provide mandate relief to towns, and prioritize state funds to go towards core government services and programs for people most in need.

Our proposals have rejected the governor’s devastating education cuts and offered a new Education Cost Sharing Formula that increases aid and meets the requirements laid out in recent court rulings to fairly fund education based on factors such as enrollment, poverty, and number of English Language Learners. We recognize that if a school district has seen a decline or an increase in population, funding must reflect that change and that funding alteration must be phased in over time to give all schools the predictability they need to manage their budgets.

The Republican proposals have also protected funding for core social services such as day and employment services for individuals with intellectual and developmental disabilities, funding for family resource centers, support for mental health and substance abuse treatment, and funding for the state’s Care4Kids program to help parents get to work. We’ve proposed plans to restore funding for programs that assist seniors aging in place such as the CT Home Care Program and Meals on Wheels and we phase out the social security tax for middle income seniors.

We have proposed targeted spending reductions and policy changes to achieve savings in both the short and long term. While many reforms are now impossible to achieve as a result of the governor’s 10 year state employee labor deal, we can still make some much needed structural changes to get costs under control without turning to tax increases.

Budgeting is about priorities. Connecticut Republicans have shown how we can prioritize the core functions of government and avoid increasing taxes on our already overtaxed residents. Our budgets have also outlined a path to increase education funding with a new, fair formula and restore funding for core functions of government and social services for seniors, children and individuals with disabilities.

Unfortunately, Republicans cannot force the legislature to act on a budget. But we will never stop fighting for our principles and demanding action.

Connecticut needs a budget, and it must be a budget that truly helps our state heal, grow and thrive.

To learn more about the Republican proposal visit www.NewDirectionCT.com