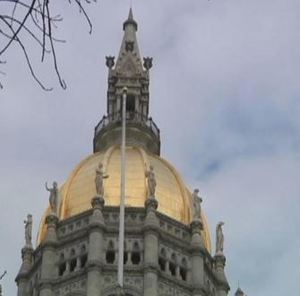 On Tuesday,  State Senators Kevin Witkos (R-8) and Craig Miner (R-30), and State Representatives Bill Simanski (R-62), Jay Case (R-63), and Brian Ohler (R-64) joined together with their caucuses to release a revised two-year state budget proposal with no new taxes that would put a stop to the governor’s executive order, restore funding for education and core social services, and provide stability for towns and cities.

“We have to pass a state budget. And it must be a budget that protects education, provides stability for residents, and does not increase taxes. That’s what Republican lawmakers have proposed in all our budgets and what we continue to offer in this revised version,” said Sen. Witkos. “It’s clear that the two largest tax increases in state history failed to pull Connecticut out of its financial crisis and have only worsened the chaos we face today. If we want to restore people’s confidence in our state, we need to stop relying on tax increases and we need to embrace the structural reforms we so desperately need to move Connecticut in a new direction towards economic growth and opportunity for all. We offer this budget as a path towards a brighter future and hope to garner bipartisan support from lawmakers and vote on this budget as soon as possible.”

“Senate and House Republicans have said for many months that our state needs a budget that makes changes to the way we govern and spend taxpayers’ money. This budget proposal does that, while prioritizing spending for education, municipalities, and core social services without raising taxes,” Sen. Miner said. “I believe this is the kind of budget that will bring financial stability to our state and put Connecticut on track to build a strong economy.”

“House and Senate Republican Caucuses have been working hard to solve our state’s budget crisis. Today’s budget announcement is the latest in a series of fully vetted, balanced and responsible no-tax increase proposals. Our budget avoids draconian cuts to municipal aid, reductions to school funding and avoids shifting the costs of the teacher’s retirement system on to towns. Additionally we propose important structural changes to how the state operates and spends money,” said Rep. Simanski. “Our goal is to enact a balanced budget that avoids the yearly deficits that have hurt Connecticut. This responsible approach would be the first step to getting our state on the right path. ”

“It is time for legislative action on a state budget. The citizenry of Connecticut should not fall victim to the failed policies of the legislative majority.  I, along with my Republican colleagues, have been ready to vote on a no-tax-increase budget option since June.  We are now three months into the fiscal year and the Majority Party has yet to put forth a plan that does not levy taxes from our residents and our municipalities.  The plan put forth today, however, maintains the core functions of government by ensuring funding for our seniors, education, and social services is available.  I urge my colleagues on the other side of the aisle to consider this proposal when we get the chance to vote on a budget,” stated Rep. Case.

“Today, we are releasing, for a ninth time, a revised no-tax budget for FY ’17-19. I, along with my fellow House Republican colleagues, are proud to stand in solidarity with our Senate Republican counterparts. As each day and month goes by, our state’s fiscal clock continue to tick. We have backed up every argument with a sound and responsible solution. It’s no secret that our revenues have yet to slow the hurtful fiscal policies of the legislative majority. We’ve proven, time and time again, by providing competent, vetted budgets, that we have the best plan to move our state forward. Come Thursday, if the Speaker of the House and majority party fail to call their own budget, then they have a moral and ethical responsibility to call this proposal,” said Rep. Ohler.

The Republican proposal includes the following:

The Republican budget enacts two policies that will reduce taxes for retirees by phasing in a tax exemption for Social Security and pension income for middle income families. In addition, the Republican budget also restores the entire $200 property tax credit for all qualifying families and individuals. Under Governor Malloy’s tenure this tax credit has been reduced from $500 and we believe that property owners deserve a break on their taxes.

The Republican budget rejects the governor’s devastating education cuts contained in his budget proposal and executive order entirely. It instead includes a fully revised Education Cost Sharing Formula that takes into account factors regarding recent court decisions, enrollment, poverty, wealth and number of English Language Learners, among other factors. This budget dedicates $33.6 million more to education in FY 2018 and $136.6 million more in FY 2019 and phases in a new formula over 10 years. It also establishes a council to analyze and make any necessary changes to the new formula within the next year if deemed necessary.  In 2018 all towns and cities’ base ECS grants will either be held harmless or gain more funding.

Acknowledging the multiplier effect that tourism has on our economy, the Republican budget proposes to transfer 1.5% of the current hotel occupancy tax to a new Marketing, Culture and Tourism account. This is not a new tax as Democrats have proposed. Rather, it dedicates a portion of the current tax for its intended purpose to boost tourism funding. This budget also implements the Passports to Parks program that has garnered bipartisan support in the legislature.

The Republican budget proposal includes overtime savings of 10 percent, a hiring freeze on non-24-hour non-union positions, and makes cuts to the legislature such as reducing the number of legislative committees. The budget also makes targeted spending cuts, 10 percent reductions to certain agency accounts, and rolls forward lapses made last year except for cuts to core services such as grants for mental health and substance abuse and youth service bureau funding.