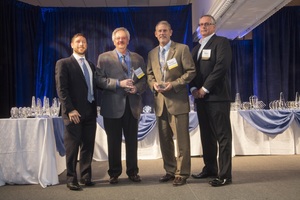 Deputy Senate Republican President Pro Tempore Kevin Witkos (R-Canton) has been named Co-Legislator of the Year by the Connecticut Associated Builders & Contractors (ABC). Witkos, who shares the honor with Representative David Baram, was recognized at the organization’s annual Excellence in Construction Awards on October 26, 2017.

“Senator Witkos’ collaborative leadership has been instrumental in addressing issues that stand as a barrier to job growth and workforce development in the construction industry,” said CT ABC President, Chris Fryxell. “There is more work to be done, but it is great to know common sense has an ally in Senator Witkos at the state capitol. We are so pleased to recognize him as our co-legislator of the year.”

“It is such an honor to be named legislator of the year,” said Sen. Witkos. “I thank ABC for recognizing the important changes made by the legislature this year to support job growth and make our state more business friendly. I look forward to seeing Connecticut’s construction industry continue to grow and thrive. Supporting the state’s building trades is an important step in fostering economic growth and success throughout our state.”