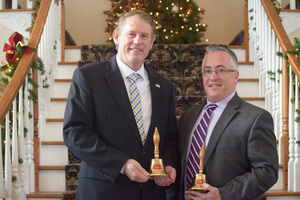 The Connecticut Council of Small Towns (COST), which represents 110 smaller communities throughout Connecticut, presented two lawmakers with Town Crier Awards at its annual meeting on January 16 at the Aqua Turf in Plantsville, Connecticut.

COST’s Town Crier Award was established to recognize and honor state lawmakers, municipal officials, and others who have distinguished themselves as outstanding advocates on issues affecting Connecticut’s small towns.

“Sen. Witkos is a tireless champion for Connecticut’s small towns,” said Leo Paul, First Selectman of Litchfield and COST’s Past President, in presenting the award.

“His leadership and advocacy on a wide range of municipal issues has been instrumental in addressing the needs of the state’s smaller communities,” Paul added. “He has been a strong advocate for providing towns with much-needed relief from unfunded state mandates and in supporting programs that are critical to our small towns, such as the Resident State Trooper program.”

The Connecticut Council of Small Towns (COST) is an advocacy organization committed to giving small towns a strong voice in the legislative process.