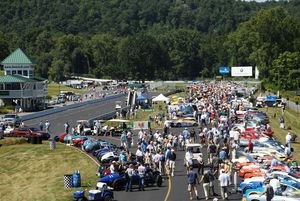 “Stafford Motor Speedway is a staple to our community and is a top economic driver.  There’s no reason to change the way we currently regulate how the track operates, which could limit the track’s viability and overall success. In a day and age when we need to be more business-friendly, this type of legislation sends the wrong message,” explained Rep. Kurt Vail.

Rep. Vail explained that throughout his life he has regularly attended events at the local racetrack and noted that that the legislation was proposed by Maria Horn (D-Salisbury), a freshman Democratic state representative from the state’s northwest corner.

“The legislation proposed by Rep. Horn seems to create a zoning commission right to regulate time of operation for vehicle racing,” said Sen. Miner. “She and I have not spoken about her legislative proposal.  I hear it has far reaching effects across the state, and I worry that what she has requested may cause larger problems than she may have considered.”

“Throughout my campaign I promised that I would support local business.  In my opinion this bill, as written, is anti-business and would directly impact Thompson Speedway Motorsports Park, a locally owned business which has been a great community partner and a local icon for many years,” Rep. Hayes said. “The Hoenig Family has invested in major improvements to this attraction which draws thousands of visitors to our northeast corner of the state. As legislators we need to do whatever possible to attract new local business and make it easier for current business owners to continue in being successful by regulations and operational barriers.  I will oppose this bill and will continue to support and work hard on behalf of local business.”

“In essence, I am not supportive of any anti-business bills,” said Rep. McCarty. “This bill certainly over reaches into race track business operations.  The bill would do significant harm to our local economy and community. Legislation should not be hindering businesses with more and more excessive and burdensome regulations. The Waterford Speedbowl, which already adheres to the town’s current noise ordinances, is a long-standing community member that attracts visitors to also dine in our restaurants and shop in our local stores. As a legislature, we must invite and support businesses to come to the state and encourage them to stay by reducing barriers to economic growth, especially during this challenging financial time in our state.”

Throughout Connecticut, local tracks are a positive influence to their communities. The legislators all agree that these delicate local economies must be protected and forced changes could disrupt and negatively impact several towns throughout the state.