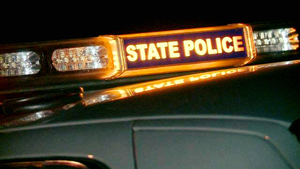 On 10/05/2017 at approximately 10:04 p.m., Troop B was notified of a serious injury motor vehicle accident that occurred in the town of Colebrook along Route 44. Troop B Troopers as well as Fire and EMS personnel were dispatched to the scene and determined the following:

Frank Rose was given a series of Field Sobriety Tests to which he failed. Frank Rose was placed under arrest for Driving Under The Influence of Alcohol / and or Drugs in violation of C.G.S 14-227a. Mr. Rose was not injured and was released on a $1,000 cash/surety bond and is scheduled to be arraigned at Torrington Superior Court, G.A #18, on 10/20/2017 at 0900 hours.

This case remains under investigation. Additional charges are pending. Anyone with information regarding this accident is asked to contact Troop B, Trooper Figueiral #1123 at 860-626-1820.