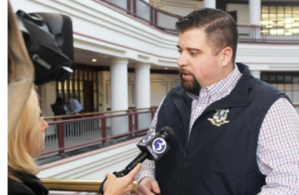 State Rep. Brian Ohler (R-North Canaan) has gained information that the Connecticut State Police Special Licensing and Firearms Unit (SLFU) has a backlog of roughly 21,500 firearms purchases or transfers, meaning that they are not logged in the state database. Ohler, who was recently named Ranking Member of the Regulations and Protection Subcommittee of the Appropriations Committee, questioned the Commissioner of the Department of Emergency Services and Public Protection (DESPP) regarding the database at a Public Hearing held on Friday, February 23.

“When I asked about a specific number of transfers or purchases that had yet to be logged, the answer was shocking. Even if the answer was a couple of hundred transactions, it poses a major public safety threat. The fact that it’s into the thousands is really doing a disservice to the law abiding citizens in the Northwest Corner and across Connecticut,” explained Ohler.

Shortly after the meeting, Ohler was informed by a state employee within the SLFU that the number of outstanding purchases or transfers was roughly 18,000.

On Monday, February 26, Ohler met again with the leaders of DESPP in a subcommittee work group to address the questions and concerns that were raised at Friday’s Public Hearing. Through further questioning, it was finally disclosed to Rep. Ohler by DESPP Commissioner Schriro that the total number of DPS 3 transfers had, in fact, climbed to 21,500.

What this means? According to Ohler, when a police officer runs a serial number of a firearm, perhaps during a traffic stop or response to domestic violence call, it is entirely possible that guns that have been purchased legally will not appear in the search. This could lead to arrests and seizures of legal firearms. “Gun control remains at the forefront of conversations, both on the state and federal levels. While more laws are being considered, it is clear that DESPP cannot handle the critical tasks they are charged with. The SLFU has systematically reduced staffing by ten people over the last three years. A plea for help and staff has fallen on deaf ears and that, to me, is unacceptable. I am willing to work with the Commissioner and my colleagues on the Appropriations Committee to try and resolve this serious issue,” concluded Ohler.

Photo: Rep. Ohler is interviewed about his interaction with DESPP at the Legislative Office Building.