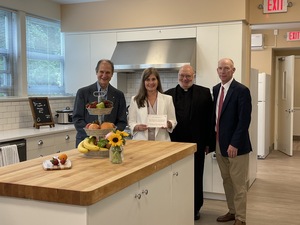 NORWALK, June 3, 2021 – The Inner-City Foundation for Charity & Education announced today that it has awarded a quarter of a million dollars to Malta House in Norwalk, Connecticut.  The $250,000 award is to support Malta House’s new building, which opened today, and specifically went to build their new kitchen and family gathering place.

A plaque in the new Malta House kitchen says the following:

With thanksgiving to The Inner-City Foundation for Charity & Education for providing the most basic human needs to Fairfield County since 1992.

The Inner-City Foundation announced late last year that it would be dissolving after almost 30 years of supporting the needy in Fairfield County via education and social service support. This gift to Malta House represents the first of many awards to be announced later this month.