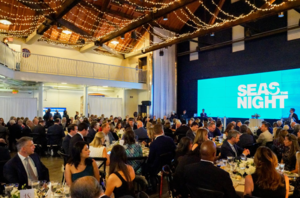 Seas the Night is the first gala held in person since 2019. The evening celebrated the extraordinary community that supported the Aquarium over its history, and in particular during the past two years. The event welcomed close to 200 guests, who socialized over cocktails in the Aquarium galleries and enjoyed an elegant sit-down dinner with live jazz by the Duke Ellington Legacy, a band founded by Duke Ellington’s grandchildren, as well as silent and live auctions.

The event was hosted by Jim Toomey, creator of the internationally syndicated daily comic strip Sherman’s Lagoon, who punctuated his emcee responsibilities with live drawings of the great white shark Sherman and his friends. Dan Ashe, President and CEO of the Association of Zoos & Aquariums, also delivered remarks.

Representing the 253 member zoos and aquariums around the world. Mr. Ashe noted that their annual awards “are the Oscars of the zoological world,” and in recognizing that The Maritime Aquarium has won five awards in the last seven years for its programs, he compared The Maritime Aquarium to “Meryl Streep or Jack Nickolson.”

A highlight of the evening included the presentations of three new awards which will be given annually to leaders who have transformed not only the Aquarium but the communities in which they work through their distinguished service and dedication. This year’s honorees were George and Carol Bauer for the Visonary Award, Greens Ledge Light Preservation Society and Timothy Pettee for the Innovation Award, and Fairfield County Bank for the Community Leadership Award.

The event is the largest annual fund-raiser for the popular South Norwalk attraction. Said Jason Patlis, the Aquarium’s President and CEO: “Nothing is better than raising critical funds for the Aquarium and having a lot of fun while doing it; it was great to bring our community of supporters and friends together, and to Seas the Night in person.”