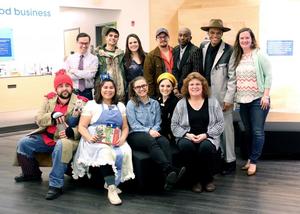 A zany cast of characters performed by Eastern Connecticut State University alumni is amid an ambitious month-long tour for a children's theatre production called "Earth Day, Every Day." Brought to audiences by eesmarts™, an Energize Connecticut initiative managed by Eversource and the United Illuminating Company, the play will tour Connecticut elementary schools from March 27-April 21.

Three public performances are scheduled: two on April 13 at the Energize Connecticut Center (122 Universal Drive North, North Haven) at 1 p.m. and 2:30 p.m. and one on April 14 at Stafford Palace Theatre (75 Main St., Stafford Springs) at 10 a.m.

"Earth Day, Every Day" was written by Eastern alumna Deborah Stauffer '16, who won the 2016 eesmarts Student Contest "Wright the World" college category. The play aims to teach children the importance of making smart and sustainable energy choices. With numerous performances at elementary schools in 38 Connecticut towns, the messages of "Earth Day, Every Day" will reach approximately 10,000 students.

The play follows Roger Recycle, Penelope Precycle, Elmer Energy, Chadwick Composter and Scarlet Upcycle as they audition for a special Earth Day commercial broadcast. During their audition, they try to convince the director that they are the best solution for conserving energy and resources. By the end, the characters realize that each of them play important roles in conserving the planet, and that they need each other to make the world a better place.

"A lot of us go into theatre to make a difference," said Director Shane Kegler '11, an alumnus of the Theatre Program at Eastern. "This production allows us to be a part of something big, and being able to do this many shows and reach this many kids proves just how important we all think it is."

"Earth Day, Every Day" features a cast and crew of 13 Eastern alumni and students. "I remember how much I was influenced by shows that were brought to my elementary and middle schools," said Alexis Kurtz '16, who played Penelope Precycle and majored in theatre at Eastern. "Hopefully, this play helps a lot of kids to become aware of ways they can make a difference in the environment, and that even small contributions are helpful in reducing waste."

Stauffer added, "I'm excited that my script has come to life. The costumes are outstanding and every character is really what I imagined them to be. I am so thrilled with it all!"

The production is the result of a collaborative effort that involved several departments at Eastern, Eversource and the Capitol Region Education Council (CREC), which resulted in an original play with more than 50 scheduled performances.

"The continued commitment of Eversource and CREC to educate children through the arts will affect the future of energy conservation," said Eastern Theatre Professor Ellen Brodie, who acted as facilitator/liaison for "Earth Day, Every Day." "This is a wonderful beginning to what is sure to be a very effective tour of enlightenment and entertainment."

The three public performances are free of charge to audience members. For more information, please contact Alysse Rodriguez at (203) 799-0460 or This email address is being protected from spambots. You need JavaScript enabled to view it. .