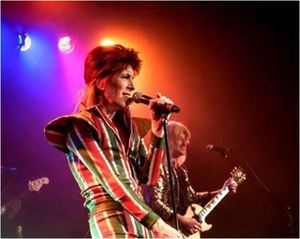 David Brighton's Space Oddity, the Internationally Acclaimed, Ultimate David Bowie Concert Experience will perform at the Wall Street Theater in Norwalk, on Friday, September 6th. Brighton's credits include performing side by side with David Bowie himself in the TV commercials for Vittel Mineral Water and for Reality - Bowie's CD.

"David Brighton has the voice, moves and look to actually step in for David Bowie if he were unavailable and few would ever know. Experiencing David Brighton's Tribute to David Bowie made for a truly remarkable evening…" says Harry Maslin, the Producer of David Bowie's YOUNG AMERICANS and STATION TO STATION Albums.