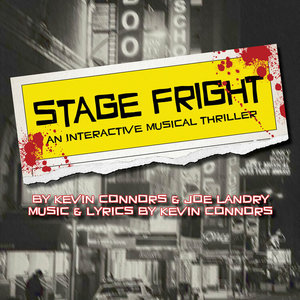 This fundraiser event is online. On the day of the event, a half-hour before the show begins, all ticket buyers will be emailed a link to where they can watch the event.

All proceeds from this event support MTC and The Actor’s Fund.

Stage Fright, by MTC Executive Artistic Director, Kevin Connors and Joe Landry with music and lyrics by Kevin Connors, tells the story of fictitious Broadway star, Barbara Jordan who, while recuperating in her Connecticut home, becomes excited about her next musical. However, when her number one fan becomes delusional, her life is turned upside down. In this unique spin on stage and screen suspense classics, Stage Fright is an interactive musical thriller where you, the audience, decide the fate of the story.

CYNTHIA HANNAH (Cynthia Barrett)
was last seen at MTC MainStage as Clairee in Steel Magnolias, where she also appeared in Cat on a Hot Tin Roof; Vanya and Sonia and Masha and Spike; A Christmas Carol: A Live Radio Play; God of Carnage and Almost, Maine. She has done over 120 commercials as well as The Guiding Light, All My Children and Billy Joel’s video, “Keeping the Faith.” Her theatre credits include the Westport Country Playhouse, Long Wharf Theatre, and the Ensemble Studio Theatre in New York.  She wrote The Pope which was part of TAW’s Playwright Festival. She also won an ACE award as Associate Producer of Hughie with Jason Robards.

Kevin Connors (Book, Music & Lyrics, Director, Artistic Director & Co-Founder of MTC)
has been a professional musical theatre composer and director for more than 40 years. Off-Broadway: Play Like a Winner (NYMF award-winner 2016 and 2017), Prime Time Prophet, Jukebox Saturday Night, The Abandoned Loves of Frederick R., Life Anonymous, Lover: The Valentino Musical, Babes Off Broadway, Saloon and Suzy Q. Selected regional productions: The Fantasticks, It's a Wonderful Life: A Live Radio Play, Babes in Toyland, A Christmas Carol and Baby; with such stars as Joan Rivers, James Naughton, Skitch Henderson, and Johnny Mathis. Co-founder Music Theatre of Connecticut where he still serves as Executive Artistic Director. He has directed over 100 MTC Equity MainStage productions including Next to Normal, Lady Day at Emerson's Bar and Grill, Cabaret, Little Shop of Horrors, Evita, Doubt, Master Class, Gypsy, (all Connecticut Critics’ Circle Award Nominations/Winners), and It's a Wonderful Life: A Live Radio Play (Moss Hart Award Winner). 2019 BroadwayWorld Award Winner as Best Director (Equity) for MTC’s Cat on a Hot Tin Roof. As a composer he has penned the score for numerous musicals including It's a Wonderful Life: A Live Radio Play and A Christmas Carol: A Live Radio Play (both published by Playscripts, Inc.). He is a nine-time Connecticut Critics’ Circle Best Director nominee, the recipient of the Tom Killen Award for Outstanding Contribution to Connecticut Professional Theatre, and served on the faculties of The Hartt School of Music/University of Hartford, Sacred Heart University, the University of Bridgeport and Musical Theatre Works in NYC. kevin-connors.com

Joe Landry (Book)
Joe's plays have been produced across the country and internationally, and include It's a Wonderful Life: A Live Radio Play, Reefer Madness, Vintage Hitchcock: A Live Radio Play, Eve & Co., The War of the Worlds: The Panic Broadcast, Relationship Status, Fake News!, Hollywood Babylon, Numb, Mothers and Sons (with Kevin Connors) and A Christmas Carol: A Live Radio Play (with music by Kevin Connors). Joe attended Playwright's Horizons/NYU, founded Second Guess Theatre Company and has been a guest artist at Sacred Heart University. Current/future projects include The Great Gatsby: A Live Radio Play and Hitchcocked! joelandry.com