Phillip Phillips returns to The Ridgefield Playhouse with two outdoor shows on August 7! 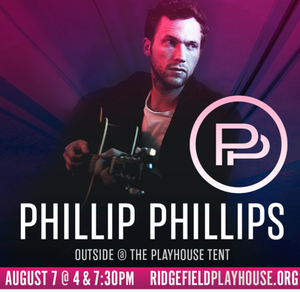 Phillip Phillips, the winner of the 11th season of American Idol in 2012 and singer of widely-acclaimed songs including “Home”, “Gone, Gone, Gone", and “Magnetic", is performing outdoors under the Tent at  The Ridgefield Playhouse on August 7th at 4:00 and 7:30 PM. Tickets for the 4:00 PM show are on sale by phone [203-438-5797] and reservations for the 7:30 PM concert are purchased by phone and online here.

Playing some of his hit songs, hidden gems, and newest tracks alongside him are guitarist Errol Cooney and cello player Dave Eggar. “We have such a blast playing with one another, it's just really free and easy,” Phillip told me on a Zoom interview last week. “We just have fun. It’s live music!”

Born on September 20th, 1990 in Albany, Georgia, Phillip Phillips fell in love with writing and playing music early at the age of 14. “I would just constantly play guitar. I took my guitar to school almost every day on the bus and I would play,” he explained. “Musically, Angus Young from AC/DC was my hero,” he said, citing Dave Matthews and Damien Rice as idols as well.

In 2009, it was evident that Phillip’s interest in music was taking a turn into becoming a blooming career when he appeared in local Georgian venues and contests, eventually winning a singing competition called “Albany Star” in 2010.

As Phillip Phillips walked in front of American Idol judges Randy Jackson, Jennifer Lopez, and Steven Tyler for his initial audition on the show in 2012, Steven Tyler whispered to Jennifer Lopez, “I got a funny feeling about this.” It turns out that he was right with Phillip wowing the judges with songs “Superstition” and “Thriller,” catapulting him forward in the competition. Many spectacular performances later, Phillip found himself in the Top 3. Singing “We’ve Got Tonight” by Bob Seger, Phillip Phillips sealed himself as the indisputable winner of the show. “It was crazy and it changed my life completely. I didn’t know what to expect, I just loved playing music,” he reminisced. “I am just very blessed and a very lucky person.”

When I asked him how other people can accomplish their goals like he did, he told me, “You really have to work hard and you can’t get lazy.” He says, “It’s all about learning.” Before finishing his answer, he delighted me by adding, “You have to stay humble as well.”

Two albums and many songs later, Phillip Phillips is still very much enthusiastic about living his dream of being a musician. “What inspires me to write music is just real life, you know, good, bad, sad, and happy,” Phillip voiced to me in our discussion. “These new songs that I have been writing have become some of my favorites. “The song called  Rescue You I really love… I think it’s a step forward in my career.” Now a dad, Phillip laughed and said, “[My son] likes them so I am taking that as a win.”

If you are near Ridgefield, Connecticut, available, and looking for a great time on Saturday, August 7th, get your tickets to Phillip Phillips’ shows at the Ridgefield Playhouse at 4:00 and 7:30 PM.

“The show is going to be great, everybody come on down,” Phillip says.

I will be in attendance that day and I as well hope to see you all there for what will become two fantastic shows.