The Lockwood-Mathews Mansion Museum to hold Gala to celebrate Architecture, Art, and Design 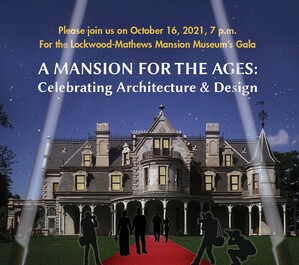 On October 16, 2021, at 7 p.m. at 295 West Avenue, Norwalk, CT, the Lockwood-Mathews Mansion Museum will hold a Gala titled, A Mansion for the Ages: Celebrating Architecture & Design co-chaired by LMMM Trustees Shannon O’Toole Giandurco and Douglas E. Hempstead. The event will include a black-tie dinner, live and silent auctions, and a special presentation by award-winning architect David Scott Parker, FAIA. Tickets for the event are $275 and seating is limited.

The Gala will also feature the exhibitions, Envisioning Space: Architecture Through the Ages, in collaboration with StamfordArt Association, and the ongoing Health, Healing & Addiction in 19th Century America sponsored in part by CT Humanities. The exhibition Envisioning Space will open to the public on Sept. 18, 2021and will be curated by artist/designer and LMMM Trustee Gail Ingis.

Shannon O’Toole Giandurco said, “I am proud to serve as a Trustee of this incredible National Historic Landmark and to work with the other Trustees and our Executive Director Susy Gilgore to bring awareness to the building and our award-winning programs.  Doug and I are thrilled to be co-chairing the Gala this year and raising funds for the Mansion and hope that many patrons will join us for a lovely evening.”

David Scott Parker, FAIA, is principal of a 20-member, multi-faceted architectural firm with broad experience working on important cultural institution, restoration, preservation and adaptive-use projects. Since its founding in 1989, the firm has received many honors, including the National Trust for Historic Preservation’s Tony Goldman Award; two New York Landmarks Conservancy Lucy G. Moses Preservation Awards; four Palladio Awards; two Institute of Classical Architecture & Art Stanford White Awards; and several AIA honors and citations in Connecticut, New York and New England. Parker is licensed in eight states and holds degrees from the University of Virginia as well as the Harvard Graduate School of Design, where he served on the Harvard Design Magazine Practitioners’ Board. David contributes his time in service on the boards of numerous institutions and not-for-profit organizations—currently including Lyndhurst and the Merritt Parkway Conservancy. He is a Trustee of the National Trust for Historic Preservation and a Fellow of the American Institute of Architects.

The Mansion will extend its greatest appreciation to the State of Connecticut and the City of Norwalk for making the much awaited Phase III of the Museum’s 2008 Master Plan possible by providing $5 million and $2.5 million respectively for the critical upgrades to the building’s electrical, I.T., heating, and fire prevention systems.

This major project will enhance visitor experience, expand community access and increase the Museum’s ability to serve youth and adults with inspiring and enriching educational programs throughout the year.

For more information on the Gala please visit: www.lockwoodmathewsmansion.com.