Opening Reception: Where Do We Go From Here? 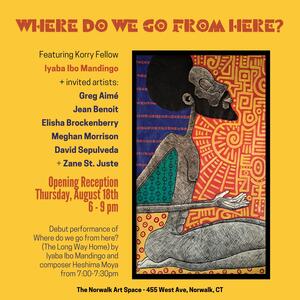 The opening reception will be held on Thursday, August 18th from 6:00-9:00pm and will feature the debut performance of “Where Do We Go From Here?” (The Long Way Home) by Iyaba Ibo Mandingo and Heshima Moya from 7:00-7:30pm.

We meet Iyaba Ibo Mandingo and Heshima Moja in a setting resembling their workspaces. Heshima sits at a piano, composing, and Iyaba is in his space with several canvases, frantically painting. Through this window into their world, a narrative unfolds that reveals visual perceptions and ideas about human identity that are often misguided.

The audience is challenged by stories, sonic invocations, and visual narratives (paintings) to see two men on a level beyond their skin and assumed ethnicity. They share their pain, joy, and gripping narrative to reveal the importance and power of vulnerability in a world that has placed clear and deliberate barriers in the path of genuine human interaction and connection. As the piece develops, we learn that they share more in common than meets the eye. Each of them share the legacy of conquistadores, the Caribbean, the language of music and the drumbeat of West Africa.