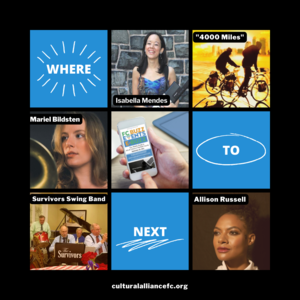 You will not want to miss this singer, songwriter, composer, pianist, and educator who is quickly becoming one of New Haven and Hartford County’s top Brazilian and Jazz entertainers in the industry.

Get ready to dance and sing to some of the great tunes from the 1920's through 1940's. This seven-piece professional jazz band – with trumpets, saxes, piano, guitar, bass, and drums – plays the hot tunes and soothing ballads of the Swing Era--plus many wonderful melodies from the two decades that followed.

As part of its All of the Sky: Five Poets, Five Saturdays series, The Aldrich hosts a poet lauded by Publishers Weekly for “her saucy, nonchalant feminist discontent.” Skillings is the author of the poetry collection Fort Not, and two chapbooks, Backchannel and Linnaeus: The 26 Sexual Practices of Plants. She is a member of the Belladonna* Collaborative, a feminist poetry collective and small press, and has taught creative writing at Yale, Columbia, Parsons School of Design, Poets House, and through Brooklyn Poets.

A ‘Jazz at Lincoln Center Emerging Artist,’ Bildsten is a New York-based trombonist, currently working as a bandleader and side-woman, playing in jazz big bands and small groups, as well as in Afro-Latin, rock, funk, and r&b bands. She is the lead trombonist in Arturo O’Farrill’s Afro-Latin Jazz Orchestra, and tours internationally with the rock band Brass Against. She has performed at Jazz at Lincoln Center, Carnegie Hall, Radio City, Birdland, the Apollo, and more.

Greenwich Historical Society’s “Picnic in the Park” at Montgomery Pinetum

Gather with family and friends to learn about the history, and experience the natural wonder of the home to the Greenwich Botanical Center. The park was shaped over 30 years after Colonel Robert Montgomery and his wife Nell purchased the estate known as Wild Acres. Reserve your picnic today and pick it up at the museum store before heading out for an alfresco dining experience in the summer breeze.

Head to Fairfield University to enjoy an encore performance of the madcap comedy and impeccable coloratura pairing in Natalie Dessay’s indelible portrayal of the feisty tomboy Marie, raised by a regiment of French soldiers. Tenor Juan Diego Flórez stars alongside her as the young Swiss villager who conquers her heart—and a slew of high Cs—in Laurent Pelly’s charming staging. Marco Armiliato conducts.

You are cordially invited to a reception for the exhibit of British born/American artist Jason Pritchard and George Radwan. Pritchard is an oil painter who captures the coastal charms and rugged landscapes of New England. Radwan shows his fascination for art with old, rusted, broken and dilapidated items. On view 12-5, every day through September 11.

Allison Russell at Levitt Pavilion for the Performing Arts, Westport

This 3-time Grammy Award-Nominated singer, songwriter, multi-instrumentalist, poet, and activist will perform work from her new album, Outside Child. A founding member of the acclaimed groups Our Native Daughters (with Rhiannon Giddens, Leyla McCalla and Amythyst Kiah), and Birds of Chicago (with her husband and musical partner JT Nero), this Montreal native has begun to emerge as a potent force among creative circles worldwide.