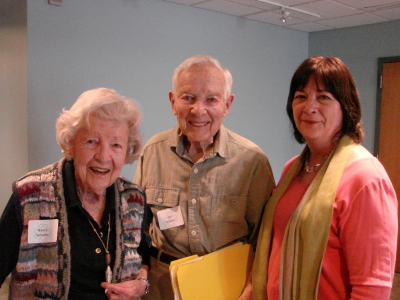 Plans for the woodworking center began with a donation from Ann and Sid Weiner of professional, industrial woodworking equipment valued over $25,000.  “This was such a substantial gift, that we knew we needed to make this dream a reality, and a project of this scale can only happen with joint community support,” said Silvermine Executive Director, Leslee Asch.

“Woodworking has been a serious omission at Silvermine, and we’re delighted now to be able to move ahead with the goal of offering classes in the fall. We are confident that there is a need for this in New Canaan and we are looking forward to welcoming new students who may never have thought to take classes here before.”  Asch said.

Bill Sessions, for whom the center is named, is a beloved New Canaan resident and woodturner who became a self-taught artisan after retiring from a business career.  Born in 1920 in Muskegon, Michigan, he attended the University of Michigan, obtaining a degree in Liberal Arts (Phi Beta Kappa), and another in Chemical Engineering (Tau Beta Pi).  During World War II, Sessions served in the Navy as an ordnance officer, concerned primarily with radar and radar countermeasures. After the war he joined the Monsanto Company, serving posts both in the U.S. and abroad.

Bill and his wife Nancy, who have been married for almost 73 years, have four grown children.  They have lived in New Canaan since 1957, when  Monsanto asked Bill, returned from temporary residence in England, to take over their New York office. Except for a few years that involved short transfers to Detroit, Hartford, and St. Louis, New Canaan has been their home.  Bill finished his corporate career by starting a chemicals division for the American Can Company, and then completing a stint as President, then Chairman of the Society for the Plastics Industry.

After retirement, Sessions decided he didn’t want to spend the rest of his life playing golf, and found himself fascinated by the art of woodturning.  It became a counterpoint to a long career in the business world.  “Whatever you are working on, you want to be proud of it.  But the closer you are to finishing the piece, the more fragile it is,” he said. “With one slight dig of your tool, you can fragment the wood into a million pieces.  Then you look around and find there’s no one else to blame….And that’s refreshing.”

Silvermine is still accepting donations of specific hand tools and contributions to help finish the renovation.  Anyone who would like to donate woodworking tools should contact Leslee Asch at the Silvermine Arts Center at (203) 966-9700 to find out which tools are still needed to properly supply the new space and its faculty and students.

Silvermine Arts Center is one of the oldest artist communities in the United States. Its five­acre campus in New Canaan, Connecticut, consists of a nationally renowned artist guild, an award-­winning school of art offering classes for all ages, an arts and fine crafts shop, and a gallery offering over twenty contemporary and historic exhibitions annually. Silvermine is a non-­profit organization that also offers an educational outreach program, Art Partners, and hosts lectures, performances, film screenings, and special events.