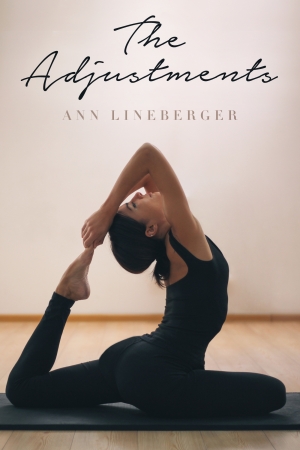 In the postcard Connecticut town of Cannondale, financial status is followed closely by social standing. Nowhere is this battle more fiercely contested than among the housewives of Fairfield County. The Adjustments, a debut romance/women’s fiction title by Ann Lineberger, airs the deliciously dirty laundry hidden behind one town’s picture-perfect facade.

In Cannodale, attending yoga classes at the trendy studio in town—taught by the sexy and mysterious Yogi Jack—is part of every elite woman’s routine. But the inner peace that yoga brings is only part of the appeal: many of the women come only for Jack and his seductive in-class adjustments. And in his private sessions, Jack provides services far beyond the usual realm of warrior pose, downward-facing dog, and shavasana.

Drama, jealousy, and intrigue will emerge as readers delve into the town’s greedy underbelly, and when one dark secret fi nds the light of day, it will threaten to change everything. Fans of Desperate Housewives and Revenge will find a romance/women’s fi ction story with an unhealthy dose of dirty scandal; yogis will find themselves yearning for their own kundalini awakening; and as a veritable realty expert, Lineberger’s layers of architectural detail will have design junkies salivating with property lust. A yoga teacher with a dark side; broken families hidden within impeccable McMansions; and an insightful take on the importance of authenticity—in The Adjustments, Lineberger has deftly weaved a compelling story that touches on one inescapable truth: nobody is perfect, and nothing is ever what it seems.

Ann Lineberger is the author of New Spaces, Old World Charm (Elements of Living) and has worked as a reporter, editor, and writer for numerous publications, including Fortune, Entertainment Weekly, Cottages & Gardens, and Home Remodeling. She earned a master’s degree in journalism and mass communication from New York University and an associate’s degree from the New York School of Interior Design. In addition to writing, Ann is an interior designer and Halstead Property realtor. She lives in Connecticut with her husband, two daughters, and two very silly dogs.