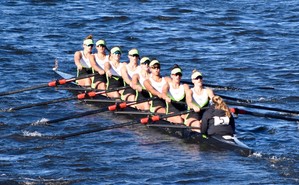 Connecticut Boat Club (CBC) raced in the 52nd Head of the Charles Regatta in Cambridge, MA. which is a 3 mile course and is the world’s largest regatta attracting close to 11,000 athletes from all over the world. The Women’s Youth 8 placed 10th out of 85 boats which guarantees them a place in next year’s world renown race.

Connecticut Boat Club is a high performance girl’s youth (middle school and high school) rowing club and Women’s Masters program based on the Norwalk River in Norwalk, Connecticut.  Founded in the spring of 2010 by U.S. National Team Junior/CBC head coach Liz Trond, the team includes girls from throughout southwestern Connecticut and Westchester County New York.  CBC has proven to be a dominant force in scholastic rowing, most notably bringing home medals at Junior Worlds where Kaitlyn Kynast took Bronze in the pair in 2016 and in 2015 Kynast took the Gold in the 4- and Julia Cornacchia took a Bronze in the 8+.  The team dominates their competition at races including the Head of the Charles, the San Diego Crew Classic, the Saratoga Invitational, the Head of the Schuylkill, and the Head of the Housatonic to name a few.  For more information, please visit the website and Facebook page.