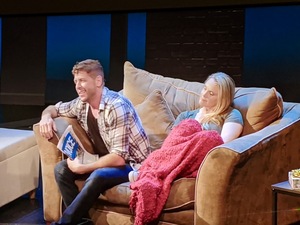 The mesmerizing performance is the perfect cure for whatever current event is ailing you (yes, even live-streamed!) The video production was truly the highest quality of any performance I have ever seen. (You can also watch The Last Five Years at the Theater with a small, socially distanced audience).

Cathy (played by Katie Diamond) and Jamie (played by Daniel C. Levine) take you on a journey of love. The story that chronicles the five-year relationship between the two New Yorkers is relatable and real. Their collective performances equaled the best of NYC’s Broadway (where along with Bryan Perri, they have all performed).

Thank you to the stars of The Last Five Years, ACT's Executive Director Katie Diamond, Artistic Director Daniel C. Levine and Resident Music Supervisor Bryan Perri ((who brilliantly directs and conducts the performance)) for turning the Broadway lights on - right here in Ridgefield.