The Wall That Heals at Veterans Memorial Park in Norwalk 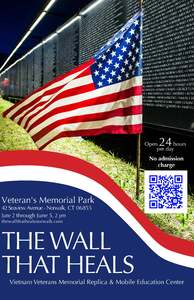 The Wall That Heals is a traveling three-quarter scale replica of the Vietnam Veterans Memorial in Washington D.C. This traveling exhibit honors the more than three million Americans who served in the Armed Forces during the Vietnam War and the wall bears the names of the 58,281 men and women who made the ultimate sacrifice in Vietnam including two Marines from Bethel.

Many who have visited The Vietnam Wall in Washington D.C. have said that it is a very moving experience.

We are pleased to announce that this traveling wall is going to be available for viewing in Norwalk CT from Thursday, June 2 through 2:00 PM  Sunday June 5th, 2022. Taps will be played each day at 5:00 PM.

Veterans Memorial Park is located at 42 Seaview Avenue in  Norwalk.

There is NO Admission Charge!

In addition to the three-quarters scale replica, the exhibit also includes a mobile Education Center that displays items representative of those left at The Wall in Washington D.C. as well as a digital display referred to as The Wall of Faces which includes photos of men and women whose names are listed on The Wall.

You can also view this Wall of Faces at  vvmf.org/wall-of-faces