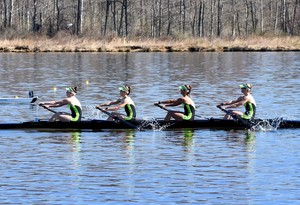 Connecticut Boat Club (CBC) raced and received gold, silver and bronze medals in the Mercer Lake Springs in Princeton, N.J. which was hosted by Princeton National Rowing Association (PNRA) and the ISA. This event combined the highly successful Mercer Lake Sprints and the ISA Sculling Championships and was open to all high schools and junior rowing clubs.

Below are the boats and athletes that medaled: