Westport native Alisan Porter, Season 10 Winner of NBC’s The Voice at The Ridgefield Playhouse on Saturday 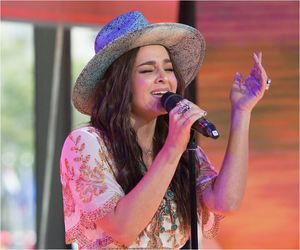 Westport native Alisan Porter, winner of Season 10 of NBC’s The Voice, brings her “voice” and newest album, “Pink Cloud”, to The Ridgefield Playhouse on Saturday, July 27. Porter made history in 2016 as the first Voice champion from Team Christina Aguilera.

Porter has been singing since she was just 5 years old, featured on and becoming Star Search’s Junior Champion. She then ventured to Hollywood where she would star in a number of hit films, such as Curly Sue, but singing would always be her “number 1.”  Porter took a break from acting and moved to Westport, CT, where she joined “The Staples Players” — the theatre group at Staples High School. She starred in West Side Story and Cinderella during her high school career. In an interview with HameltHub Porter recounted “how important [her] high school education was as far as the arts went” and how key the Staples Players were in her growth and learning experience.

Post-high school Porter made her way to Broadway where she was a lead in Footloose and the 2006 revival of A Chorus Line. However, it was after a hiatus from the main stage and a friend's secret submission to The Voice that pushed Porter into a new facet of her already immense career.  Alisan found her time on Team Christina Aguilera as a great learning experience as she shares much in common with Aguilera. The two both grew up in the limelight and currently balance a career in music with motherhood. Thus, her time on The Voice enabled her to share her great songwriting talent on a wider scale.

Reflecting on this time and why she chose Team Christina Aguilera, Porter said, “At the end of the day it was one of those things where I saw her, we locked eyes … and I just felt like maybe we needed each other, maybe these strong women needed each other.” She obviously made the correct choice as Porter went on to win Season 10 of The Voice in 2016, the first winner from Team Christina Aguilera in history.

With the platform The Voice has given Porter, she has really taken off, releasing her EP, "I Come in Pieces" along with three singles off the upcoming album "Pink Cloud": "Wild One", "Never Could" and "What If I Wake Up".  Porter reflects on "Pink Cloud", calling it "the bible of everything I’ve done.”

All of her music has strong roots in country and rock and roll, but when discussing the sound of “Pink Cloud” Porter shared that she really “committ[ed]to the vibe of the genre [country] itself.” The albums definitely have a 1970s “California country” and “Nashville feel.” “Pink Cloud” specifically focuses on themes of confidence, independence, freedom, and her career as an artist. Porter shares that her album is definitely influenced by her “huge transformation after having two kids” and it is her way of expressing love and self-reflection; especially now that she has found a partner who she says is supportive of her music and career.

The album “Pink Cloud”  is how Porter hopes to leave her mark and express who she truly is now -  as a mother and musician. Furthermore, she hopes to share her growth as a woman who has really come into her art with those who have known her since her time as a Westport resident.

Opening for Porter on July 25 will be North Salem resident Jake Wildhorn whose music is a mix of contemporary Pop and Acoustic Rock inspired by both modern and classic artists such as Don Henley, Rob Thomas, John Mayer, and Ed Sheeran.