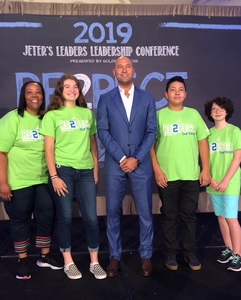 The Carver students invited to attend were rising 9th graders Chloe Mattus and Sanda Andronic (recent Ponus Ridge Middle School graduates) and Alfredo Yepez (a Nathan Hale Hale Middle School graduate). We are grateful to the William Caspar Graustein Memorial Fund and the Per and Astrid Heidenreich Family Foundation for making it possible for our students to be invited and to attend.

The Leadership Conference was hosted by members of the Jeter’s Leaders program, an intensive, four-year leadership development initiative for high school students who are role models in their communities. Jeter’s Leaders is the signature program of the Turn 2 Foundation, which was established by former New York Yankees shortstop Derek Jeter in 1996 to motivate young people to turn away from drugs and alcohol and “turn to” healthy lifestyles. The 2019 conference featured workshops that address critical issues to young people and a panel discussion empowering youth to avoid falling into negative influences and be leaders in their communities.

Wednesday’s highlight was the Pack Shack’s Feed the Funnel Party. Conference leaders and the students packaged more than 75,000 meals that were donated to Philabundance. Levi’s and Haddad Brands donated 525 jackets so the group could design jackets that signify their mission to ignite positive social change. The jackets were donated to William McKinley Elementary School’s backpack program and to the youth participants at the conference.

This annual Conference is an important way for Jeter’s Leaders from West Michigan and New York City to accomplish their mission of promoting healthy lifestyles, academic achievement, and social change activism among high school students. This year’s theme was “RE2PECT Our Voice!” and the Leaders picked some very relevant and powerful topics to discuss with the visiting students from around the country.

The Jeter’s Leaders Leadership Conference featured other beneficial, educational, and inspirational activities. The students heard from motivational speakers, gave back to the local community by participating in the community service project, took part in a Youth Summit – and enjoyed a lot of sightseeing! The students saw historic landmarks such as the Liberty Bell and enjoyed their first Philly cheese steaks before heading back to Norwalk. The Rocky Statue and the “Rocky Steps” were among the highlights. The students snapped a picture with the Rocky statue at the bottom of the stairs at the Philadelphia Museum of Art and then ran up the museum’s grand stairway to try their version the famous two-arms-raised salute. Everyone enjoyed a memorable dinner cruise on the Spirit of Philadelphia Wednesday evening, and the conference concluded on Thursday with a Youth Summit.

The name "Turn 2" is symbolic of the dramatic double play made by infielders during a game. It also represents Derek's wish to promote healthy lifestyles among young people and enable them to "Turn 2" his Foundation for guidance and support to avoid drugs and alcohol. No. 2 was Derek's jersey number during his 20-year career with the New York Yankees, and was retired in Monument Park during a special ceremony in 2017.