Meet the CAST of ACT of CT's LITTLE SHOP OF HORRORS! 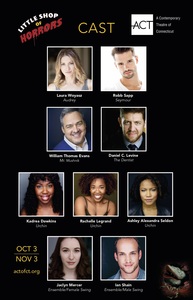 ACT (A Contemporary Theatre) of Connecticut is excited to announce the cast for its upcoming production of LITTLE SHOP OF HORRORS. Directed by Jason A. Sparks, this global phenomenon lands in Ridgefield on October 3rd with performances through November 3rd.

Director Jason A. Sparks, whose credits include Broadway’s HELLO DOLLY!, SHE LOVES ME, and AFTER MIDNIGHT, promises “an exciting production full of comedy, satire and camp.” LITTLE SHOP OF HORRORS will be Music Directed by P. Jason Yarcho (Broadway/Broadway National Tours: WICKED, BULLETS OVER BROADWAY, SHUFFLE ALONG, AN AMERICAN IN PARIS, BRIGHT STAR, FALSETTOS).

Fans of ACT of Connecticut will be thrilled to see Artistic Director Daniel C. Levine reprise the role he played on Broadway: the sadistic and leather-clad dentist, Orin Scrivello. Of the role, Levine said, “It was such a thrill playing Orin (The Dentist) nearly 15 years ago and I can't wait to revisit this insane and iconic character! If ever I were to perform in an ACT show, this is the one! I'm excited for our audiences to see what we have in store for them!”

With book and lyrics by Academy Award Winner Howard Ashman and music by TONY and Academy Award Winner (and one of ACT’s Artistic Advisors) Alan Menken, LITTLE SHOP OF HORRORS has amassed numerous awards since its musical debut over thirty years ago, including the Drama Desk Award for Best Musical, and Outer Critics Circle Award. Based on the 1960 film, LITTLE SHOP OF HORRORS follows amateur botanist Seymour, his love interest Audrey and her sadistic dentist boyfriend Orin, all while Audrey II (the man-eating plant) threatens to destroy the world.

Performances of LITTLE SHOP OF HORRORS run October 3rd through November 3rd with previews October 3rd and 4th. The show times are: Thursdays at 7pm, Fridays at 8pm, Saturdays at 2pm and 8pm, and Sundays at 2pm. Purchase tickets HERE. For more information about ACT of CT, ticket and annual subscription sales, fall education programs, sponsor/donor opportunities, and other theatre-related news and announcements visit www.actofct.org

ACT (A Contemporary Theatre) of Connecticut is a nonprofit 501(c)(3) Equity theatre located in Ridgefield, CT. Founded and led by Katie Diamond, Daniel C. Levine, and Bryan Perri, ACT of CT presents limited engagement runs of well-known Broadway musicals and plays, as well as world-premiere productions by the next generation of writers and composers. ACT of CT was honored with 11 BroadwayWorld Connecticut Awards in 2018-2019, its inaugural season. The theatre company produces four shows per season, including one show in the “Presenting Stephen Schwartz!” Series (honoring ACT Artistic Advisor, Stephen Schwartz). All shows feature both Broadway stars and local Fairfield and Westchester County talent. In addition to fully produced main stage productions, ACT of CT hosts a New Works Series, The Broadway Unplugged Series, youth education classes, masterclasses, camps, workshops, and a conservatory program for high school students. ACT of CT is located at 36 Old Quarry Road, in the beautiful village of Ridgefield, CT.